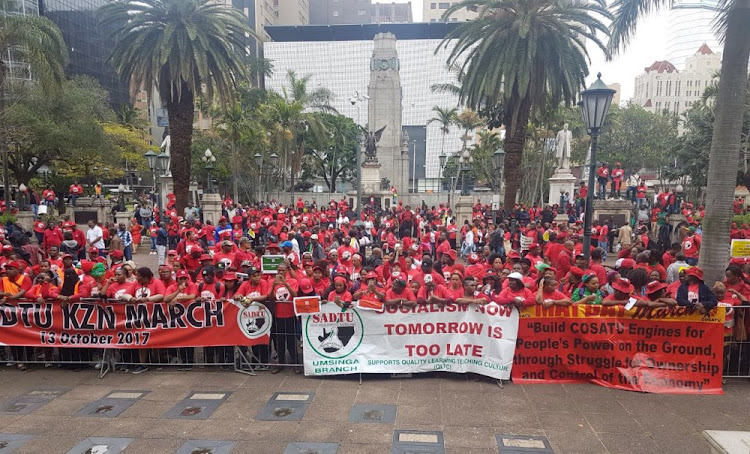 SADTU members flooded the Durban CBD on Friday protesting against what they say is a shocking state of education in KZN.
Image: BONGANI MTHETHWA

The KwaZulu-Natal department of education has questioned the timing of a protest march by the South African Democratic Teachers’ Union (Sadtu)‚ which came just three days before more than 198 000 learners write their matric exams.

On Friday‚ thousands of Sadtu members flooded the Durban central business district in a flow of red‚ protesting against the state of affairs in education in the province.

The biggest teacher union in the country is concerned about:

* The non-implementation of the Posts Provisioning Norms — an assessment made by the department relating to staffing requirements at a school;

* Lack of provision of basic infrastructure such as toilets at schools; and

* The glaring failure to provide support to education workers and teachers.

The union handed over a memorandum to the department’s head‚ Dr Vusumuzi Nzama‚ who was accompanied by provincial treasury head Simiso Magagula. It claims that 184 posts of office based managers advertised in February last year have not yet been processed and many more vacancies have since been created by people leaving.

They have warned the department that this is the beginning of rolling mass action. A march will be held in Pretoria on Tuesday next week.

In a statement issued on Thursday‚ before the Durban march‚ the department described the planned protest as a “destruction” because the province was getting ready for the exams.

Sadtu national general secretary Mugwena Maluleke used the march to say the union will fight any attempts to capture the Public Investment Corporation‚ which manages the Government Employees Pension Fund.

“We’re saying Guptas will never touch our money. Anyone who thinks that our money is ready to be looted and taken to Dubai is lying to himself. We are going to fight as Sadtu‚” he said.

The march‚ also attended by labour federation Cosatu and South African Communist Party members‚ was also used as a campaign for Deputy President Cyril Ramaphosa. The 250 000-strong teacher union has endorsed Ramaphosa for ANC president. The party’s elective conference is in December.

The Gupta family - fighting for financial survival in the High Court - also face the threat of revolt by thousands of mineworkers they employ.
News
4 years ago

Students at the University of Fort Hare returned to class on Tuesday. This followed two weeks of protests aimed at the National Student Financial Aid ...
News
4 years ago

The mother of a 15-year-old boy who was allegedly shot dead by a white man in Lichtenburg‚ North West‚ says she will never forget how her son died.
News
4 years ago