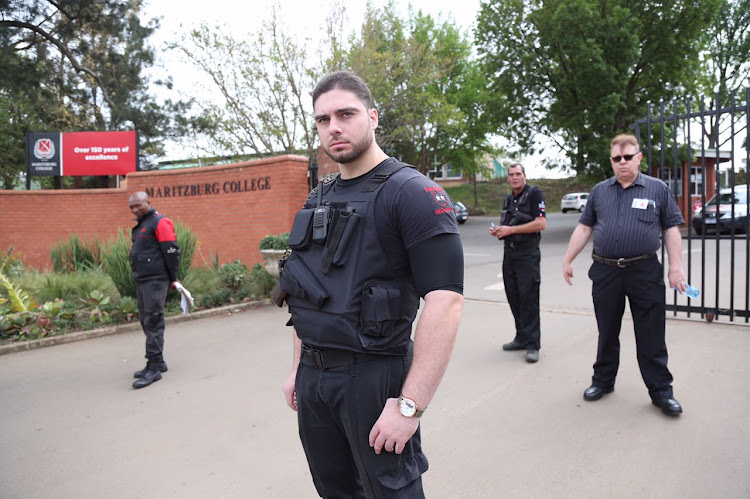 Charges against three pupils whose tweet caused a furore at one of the country's oldest schools have been put on hold‚ pending a provincial education department probe into racism.

On Friday‚ the parents of three Maritzburg College pupils were informed that their sons were facing several discipline-related charges regarding a picture posted on social media‚ in which the three posed in school uniform holding T-shirts with the words: "EFF our last hope of getting our land back".

Heavily armed security personnel manned the entrance to Maritzburg College in Pietermaritzburg on Monday after three pupils got into trouble for ...
News
4 years ago

He said charging the boys was in direct violation of the constitution.

On Monday‚ the provincial education department met with the school's governing body and principal. Spokesman Muzi Mahlambi said: "The school has not dropped the charges‚ but put everything on hold‚ pending the conclusion of our full-scale investigations relating to racial matters at the school as has been reported."

A mother says it was just a bit of schoolboy fun that set off the furore that has engulfed one of South Africa's oldest schools.
News
4 years ago

KZN Education MEC Mthandeni Dlungwana told TimesLIVE: "I can confirm that we have sent our officials to the school. We sent them because we did not want the EFF to politicise the issue. I can also confirm that neither the kids nor their parents are members of the EFF‚ but because of perceived racism at the school‚ we are made to understand that the kids did this just to agitate the teachers."

He said this comes following claims that there were repeated allegations of racism at the school that weren't acted on.