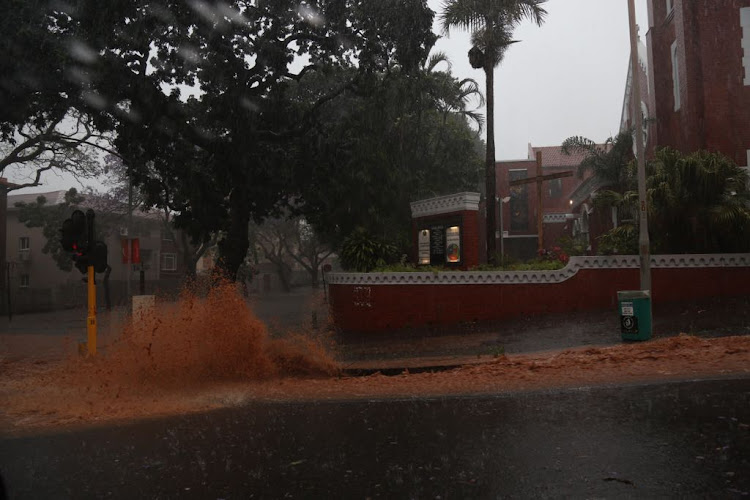 Damage to public buildings as a result of the storms and floods in KwaZulu-Natal and Gauteng last week is estimated at R16-million‚ minister of public works Nkosinathi Nhleko said on Monday.

“While the final cost is being quantified to inform the final assessment‚ repairs at some of the 30 properties in KwaZulu-Natal‚ i.e. 17 state-owned facilities occupied by South African Police Service‚ Departments of Labour‚ Justice and Defence as well as 13 leased facilities has commenced‚” Nhleko said in a statement.

Nhleko confirmed that repairs to the South Gauteng High Court and Krugersdorp Home Affairs in Gauteng which were minimum had already been attended to.

South Africa’s short-term insurers‚ reeling with claims overload in the aftermath of this week’s two major storms‚ have not yet been willing to ...
News
3 years ago

Triple tragedy for KZN man who lost wife, daughter & grandchild in the floods

Cyril Maphumulo watched in silence on Thursday as the body of his three-year-old daughter, Nolwazi, was pulled from the reeds flanking the Isipingo ...
News
3 years ago

He said that contractors were expected to be on site by the end of this week at all remaining sites after emergency procurement procedures and appointment of contractors had been finalised.

He committed to mobilise resources to assist the affected provinces wherever possible.

The minister added that the Ministers and Members of Executive Councils Meeting (MINMEC) held on Friday had noted progress and the leadership provided by the premiers of KwaZulu-Natal and Gauteng and had expressed confidence that interventions aimed at mitigating the effect of the damage would minimise disruption to services.

“MINMEC [Ministers and Members of Executive Councils Meeting] expressed condolences to families that lost their loved ones during the disaster and appreciation of the commitment of officials who were part of rescue operations‚ disaster relief efforts and technical assessment teams. The heroic action of ordinary citizens and humanitarian organisations has demonstrated Ubuntu‚” added Nhleko.

State-owned freight and logistics company Transnet has put in place “business continuity” plans for all three operation divisions affected by this ...
News
3 years ago

In the aftermath of Tuesday’s storm‚ shack dwellers in Durban have been picking up the pieces‚ hanging up their blankets and clothes‚ and trying to ...
News
3 years ago

An 18-year-old Durban student has ticked wakeboarding behind a car on the street‚ in the middle of a raging storm off his bucket list.
News
3 years ago

The storms also affected civilians on a large scale.

Old Mutual Insure reported that it had already received more than R15-million worth of claims since last Wednesday‚ and by Friday‚ OUTsurance had received 3‚000 claims arising from Monday’s Gauteng storm‚ and 1‚500 from clients affected by the KZN storm the next day.

South Africa’s short-term insurers‚ reeling with claims overload in the aftermath of this week’s two major storms‚ have not yet been willing to quantify the full extent of those claims.