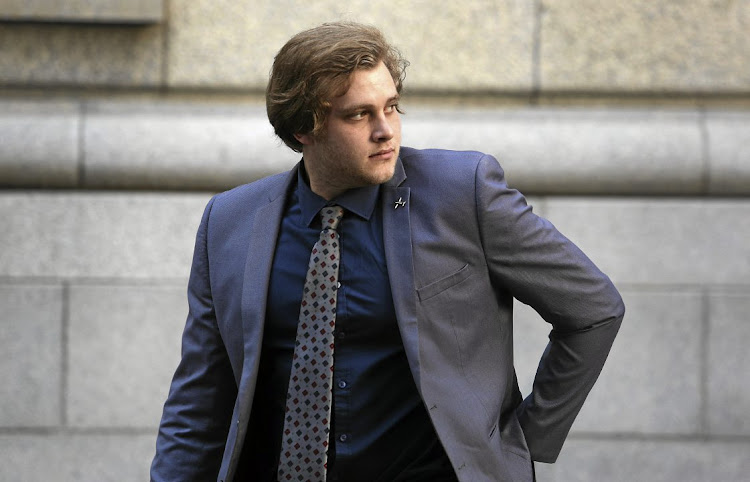 Van Breda stands accused of axing to death his parents and brother in a bloody frenzy that unfolded on the top floor of their luxury home at De Zalze estate in Stellenbosch in 2015.
Image: Ruvan Boshoff

The DNA expert hired by the defence in the Henri van Breda trial came under severe attack in the High Court in Cape Town on Monday with her credibility as a witness severely undermined.

Last week‚ Dr Antonel Olckers - hired by the defence - trashed the damning DNA analysis presented by the state‚ claiming they had not followed standard operating procedures.

Van Breda stands accused of axing to death his parents and brother in a bloody frenzy that unfolded on the top floor of their luxury home at De Zalze estate in Stellenbosch in 2015.

The state's DNA analysis‚ presented by Lieutenant-Colonel Sharlene Otto‚ an experienced scientist at the state forensic laboratory‚ had cast a pall of anxiety over Van Breda's face over several days last month.

But‚ on Monday‚ a gruelling court session that had Olckers coming under fire from both state prosecutor Susan Galloway and Judge Siraj Desai‚ exposed the fact that Olckers:

- Lacks practical laboratory experience‚ compared with Otto who has been analysing DNA in the lab for 24 year‚ and has primarily been an academic;

- Only prepared her “independent report” after hearing the testimonies of state witnesses;

- Only focused on what the defence instructed her to focus on rather than giving her expert opinion of the full data;

- Narrowed the scope of her report as the trial to date unfolded;

- Has no statistician in her consulting company‚ DNAbiotec‚ even though statistics are vital to determining probability of matches when it comes to DNA;

- Has never done a proficiency test to confirm her abilities with DNA analysis;

- Has never used either Luminol or Blue Star which were used by the state in their forensic DNA analysis of samples.

Desai said to Olckers: “Your report was only done after Joubert and Nel [two state witnesses from the SAPS] had testified so you were aware of what they said when you drafted your report. Did you not prepare an independent report on factual evidence before your mind was clouded either by what you heard here or things you heard from counsel outside of court?”

Galloway accused her of “only reporting on what you were asked to by the defence as time went on”.

Olckers confirmed this‚ saying she had only focused on “the most pertinent issues” and admitted that she did not write any report prior to hearing evidence.

Desai pointed out that “times had certainly changed” if a DNA expert only prepared a report after hearing the evidence of state witnesses.

Galloway grilled Olckers on this.

“In any trial‚ criminal or civil‚ the court makes a decision on objective evidence given by expert witnesses. You are meant to assist the court in coming to a decision by giving your expert opinion – even if it harms the defence.”

However‚ she had been hired and paid as an expert for the defence‚ and it was clear she had not given “independent analysis”.

Galloway said Olckers' CV showed that her record of employment consisted only of positions that were “academic or administrative” which undermined her credibility when criticising the state's DNA analysis done in the labs.

Olckers conceded that her company does not run a diagnostic laboratory‚ that her company mainly does training and research‚ and that she “does very little practical work as the CEO of the company”.

When asked if she had ever done a proficiency test‚ she said‚ “No‚ because I have never worked in a forensic laboratory” and also said‚ “Yes‚ we are paid to appear in court but there is nothing sinister about that.

We deliver a service. And also do pro bono work.” She admitted she had never used Luminol or Blue Star‚ and when Galloway said “then how could you dispute the data if a witness testified on what they found using it”‚ defence counsel Matthys Combrink objected.

The case was then adjourned to after lunch.

Freshly sheared but with his cowlick fringe still in place, Henri van Breda dozed off in the dock in the Cape Town High Court on Monday as he ...
News
3 years ago

Murder accused property mogul Jason Rohde will return to the scene where his wife took her last breath over a year ago.
News
3 years ago

Henri van Breda - looking depleted and in need of a haircut - still cannot decide if he wants to be in the witness box‚ but certainly doesn't want to ...
News
3 years ago
Next Article