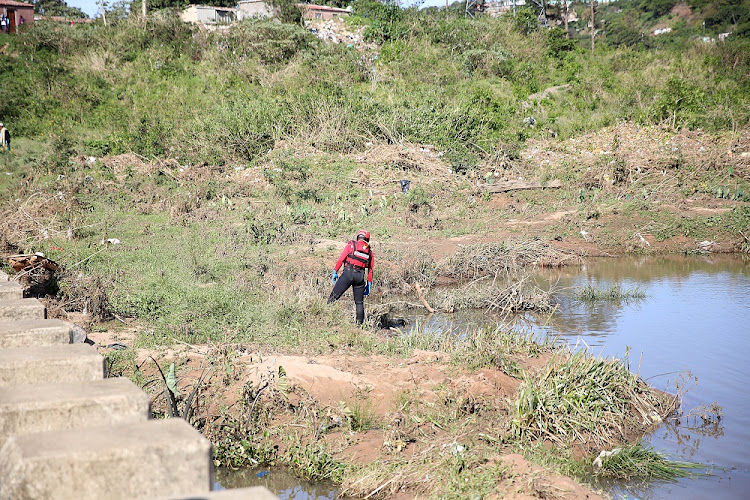 Another body has been recovered from a KZN river following last week's devastating storm. The latest victim, an adult male, was found in the Ezimbokodweni River
Image: THULI DLAMINI

Police rescue technicians pulled the decomposing body of a man from the Umbogintwini River near KwaMakhutha‚ south of Durban‚ on Tuesday‚ as the death toll from last week’s storm continues to mount.

SAPS Search and Rescue Unit members were called to the scene near a low-lying foot bridge‚ after part of the man's torso was seen by someone crossing the river. The man’s body was buried in thick mud‚ and had to be carefully extracted from the river.

It is understood that the man had been crossing a stream last week‚ when he was swept away by fast-moving water. The site of his disappearance was nearly 3km upriver.

Meanwhile‚ an Umlazi woman has spent every cent she has in the search for her daughter‚ who was swept away by flash flooding in the south Durban township one week ago.

An Umlazi woman has spent every cent she has in search of her daughter‚ who was swept away by flash flooding in the south Durban township a week ago.
News
4 years ago

Lindokuhle Kweyama is still clinging to hope that her missing daughter‚ Okuhle‚ will still be found. The toddler was washed away when the river near her crèche in Umlazi D-section overflowed during the storm that ravaged KwaZulu-Natal last week Tuesday.

She had been pulled from the rising waters and placed on an embankment by a schoolboy who was passing by. But as the scholar returned to rescue other children from the crèche‚ the toddler was washed away by the torrent.

The search for the missing child has been scaled down‚ as she has been missing for more than a week. But the distraught mother has not given up on the quest to find her daughter.

"I haven’t been sleeping; I have been going to the police station every day to seek answers since her disappearance‚" she said.

Kweyama‚ who is employed as a cleaner‚ has spent all her money and time trying to get answers.

It's a case of snakes in the city. Literally.
News
4 years ago

"I haven’t been to work since Tuesday [when her daughter disappeared]‚ I have spent all my money travelling to and from the police station."

The storm battered the coast of KwaZulu-Natal for 12 hours and has so far claimed 15 lives.

Damage from the extreme weather is expected to run into the billions‚ with crucial state infrastructure including hospitals and schools damaged by heavy rains and driving winds.