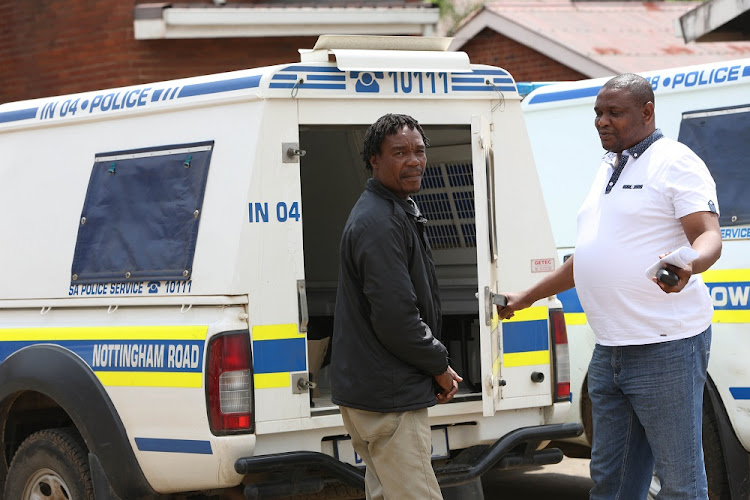 Thulani Moses Mthembu accused in the Solik Murder case is escourted by Warrent Officer Sikhumbuzo Mdunge into the police cells after appearing in the Howick Magistrates Court.
Image: Jackie Clausen

There is finally some closure in the murders of KwaZulu-Natal Midlands couple Christine and Roger Solik.

On Tuesday‚ 38-year-old Xolani Ndlovu pleaded guilty to the murders‚ which were committed in Nottingham Road on February 17.

Ndlovu appeared before the Pietermaritzburg High Court on various charges‚ including two of murder.

A neighbour had reported the Soliks - Christine‚ 57‚ and Roger‚ 66 - missing after noticing that their home was in disarray.

When Nottingham police arrived at the house they discovered bloodstains and opened an investigation. A few hours later‚ Christine’s body was discovered in a river in Impendle.

Her husband’s body was discovered by search-and-rescue teams three kilometres downstream a few days later. Ndlovu and his co-accused‚ Thulani Mthembu‚ were arrested on March 26 after police raided their hideout in Umlazi during the early hours of the morning.

Ndlovu has been sentenced ten years’ imprisonment for kidnapping‚ 15 years for house robbery and two life sentences for two counts of murders. KwaZulu-Natal Acting Provincial SAPS Commissioner‚ Major General Bheki Langa‚ welcomed the sentence‚ saying‚ “We hope this will give closure to the family who lost their loved ones in a brutal manner.”

Ndlovu’s co-accused‚ Mthembu‚ was set to appear in the Pietermaritzburg High Court on Wednesday.