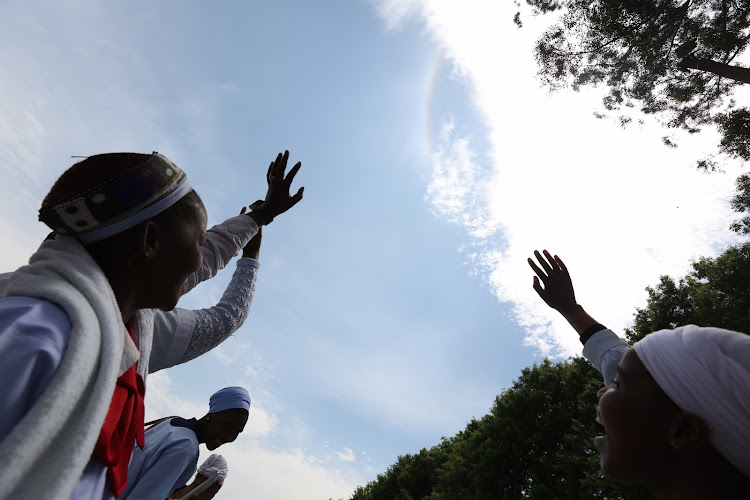 Jubilation by Mduduzi supporters as a rainbow appears in the sky over their gathering at Dales Park in PMB. The late leader Vimbeni Shembe was known as uThingo ( Rainbow) and their faction is currently challenging a court decision that Vela Shembe be the leader of the Shembe church.
Image: Jackie Clausen

Security has been stepped up at the Pietermaritzburg High Court as two factions of the Shembe church prepare to face off over the next three days.

The battle for supremacy of the vast church has been in court since 2011 after the death of its leader‚ Vimbeni Shembe.

His son Mduduzi Shembe and his cousin Vela Shembe both claim to be the rightful heirs to the throne.

Exactly a year ago Durban High Court Judge Achmat Jappie ruled that Vela Shembe was the rightful leader of the Nazareth Baptist Church‚ commonly known as the Shembe church.

However‚ the decision didn't go down well with some congregants as they still recognised Mduduzi Shembe‚ known as uNyazilwezulu (Thunder of the Heavens)‚ as their leader.

Immediately after the judgment‚ Mduduzi's lawyer asked for leave to appeal the judgment‚ which Judge Jappie granted. On Monday morning‚ police sealed off parts of Church Street to keep a crowd at bay‚ while another large group was contained at Dale's Park‚ west of Pietermaritzburg.

Inside the courtroom gallery‚ two stern-faced factions sat divided by a buffer of uniformed police personnel‚ with the Mduduzi faction in white robes (iminazaretha) and the Vela faction in smart suits.

Interpreter Sibongiseni Mkhize stood up to urge restraint between the two factions‚ giving them the house rules.

In October last year Judge Jappie ruled that a deed of nomination‚ the key piece of evidence relied on by Vela Shembe‚ was valid.

The judge said Mduduzi Shembe‚ who was announced as the leader at his father's funeral‚ had failed to show that his father had verbally nominated him.

The spokesperson for the Ebuhleni group say they are appealing because last year's judgment will have an impact for generations to come.

The court's ruling placed Vela in charge of all assets of the church and makes him the sole trustee of the Church of Nazareth Ecclesiastical Endowment Trust‚ which has control of properties owned by the church.

The ruling effectively made Vela the legally recognised leader of more than two million followers of the church.

The appeal will be heard by a full bench of judges and is set down for Monday to Wednesday.

Durban law enforcement agencies made their presence felt at the city’s High Court on Wednesday as two opposing factions of the Shembe church arrived ...
News
6 years ago

A second handwriting expert told the Durban High Court on Tuesday that the disputed signature on the deed of nomination of the late leader of the ...
News
8 years ago

A trial to determine the leadership of the Shembe church was delayed in the Durban High Court on Monday. Proceedings did not start as scheduled, ...
News
8 years ago