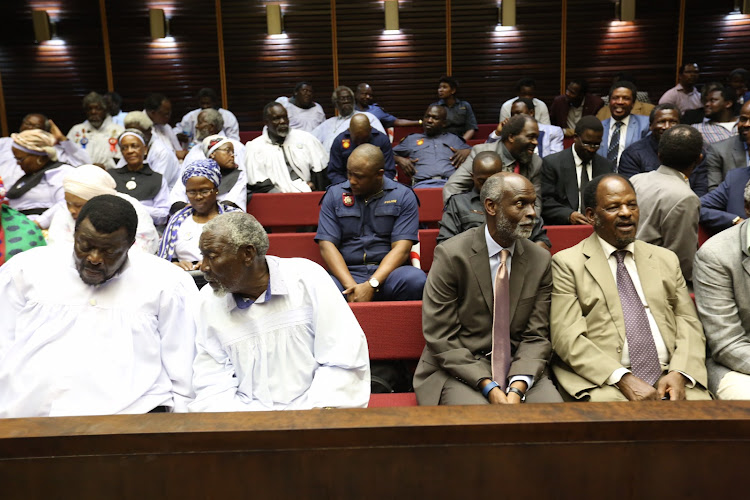 Mduduzi supporters from Ebuhleni on the left appealing the decision that Vela Shembe is the rightful leader of the Shembe church , Vela supporters from the Thembezinhle group are seated in the suits on the Right. The two factions were separated by a cordon tape in the PMB High court for the appeal.
Image: Jackie Clausen

There was cautious jubilation from the two warring Shembe church factions on Monday afternoon as they exited the courtroom after the Pietermaritzburg High Court reserved judgment in their long running succession battle.

If anything‚ the appeal judges who now have to contend with the authenticity of documents that saw Vela Shembe winning last year's battle over Mduduzi Shembe for the control of the 2 million-member church gave little indication of what direction the seven-year marathon case will take.

The battle for supremacy of the vast church has been in court since 2011 after the death of its leader‚ Vimbeni Shembe.

His son Mduduzi Shembe and his paternal uncle Vela Shembe both claim to be the rightful heirs to the throne.

Security has been stepped up at the Pietermaritzburg High Court as two factions of the Shembe church prepare to face off over the next three days.
News
4 years ago

Exactly a year ago Durban High Court Judge President Achmat Jappie ruled that Vela Shembe was the rightful leader of the Nazareth Baptist Church‚ commonly known as the Shembe church.

However‚ the decision did not go down well with some congregants as they still recognised Mduduzi Shembe‚ known as uNyazilwezulu (Thunder of the Heavens)‚ as their leader.

In October last year Jappie ruled that a deed of nomination‚ the key piece of evidence relied on by Vela Shembe‚ was valid.

Jappie had said Mduduzi Shembe‚ who was announced as the leader at his father's funeral‚ had failed to show that his father had verbally nominated him.

The court's ruling placed Vela in charge of all assets of the church and makes him the sole trustee of the Church of Nazareth Ecclesiastical Endowment Trust‚ which has control of properties owned by the church.

Durban law enforcement agencies made their presence felt at the city’s High Court on Wednesday as two opposing factions of the Shembe church arrived ...
News
6 years ago

The ruling effectively made Vela the legally recognised leader of more than two million followers of the church.

On Monday Mduduzi's legal team presented strong argument about the authenticity of the letter by the late leader Mvimbeni Shembe.

The applicants‚ via Advocate Rajesh Choudree‚ said that the letter is fake because it was signed without witnesses. They said they had a handwriting expert who has agreed with them that the letter was forged.

There are two documents‚ a letter from Adv Zwelabantu Buthelezi who was instructed by Mvimbeni Shembe and the Trust Deed‚ both of which agree that Vela should be the rightful leader of the church.

Last year‚ Jappie said he was satisfied that the letter that nominated Vela was authentic.

However‚ it was no smooth sailing for the church lawyers on Monday as the full bench of judges that included deputy judge president Isaacs Madondo‚ Thoba Poyo-Dlwati and Jerome Mnguni tore into both Choudree and Adv Archie Findlay SC representing the Vela faction.

The judges argued that the letter and the trust deed are both saying the same thing.

They also say that there is evidence from three experts which prove the letter is authentic.

"You can't reject evidence unless there's proof of conspiracy‚" he said.

Ebuhleni Baptist church spokesperson Lizwi Ncwane said: “We are of the view that there were fundamental or profound church principles and policies which were disregarded and our primary intent in terms of pursuing the matter to appeal is we want to see to it that a good precedent is set so that the generations to come are not misled.”

Vela Shembe's faction say the appeal is a waste of time.

The judges have four months to deliver the decision but both lawyers are optimistic it will be soon.