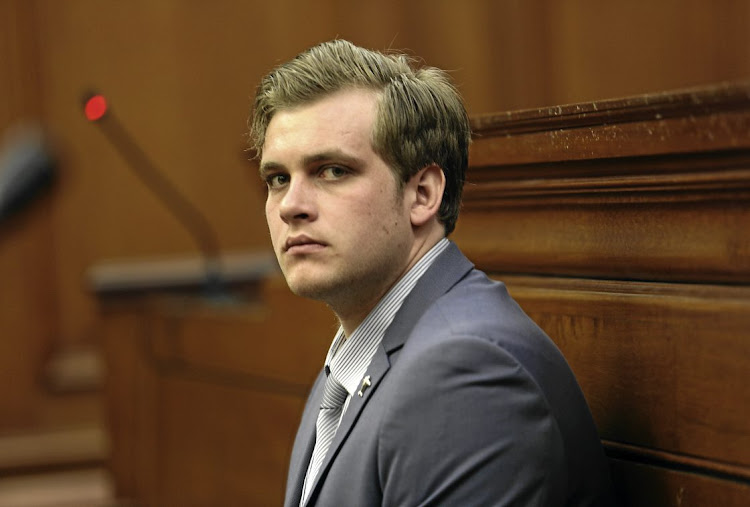 Triple-murder accused Henri van Breda sat quietly in court on Monday while a witness for the defence conceded that he might have been "malingering" (feigning illness).

Mike du Trevou, a neurosurgeon testifying for the defence, said it could not be ruled out that Van Breda had made up his story that he had lain passed out for two hours and 40 minutes after his family had been brutally attacked in their luxury home in 2015 - leaving three of them dead.

Senior prosecutor Susan Galloway had taken the doctor through the range of causes of loss of consciousness to see which could be eliminated with respect to Henri van Breda.

Van Breda has no "medical condition" that could explain it. He was "not on medication". If a panic attack had caused him to faint, he would have felt better "the minute he was horizontal" and the blood rushed back to his head.

He had made "no mention" to the doctor who examined him of the two hours and 40 minutes for which he claims he was out cold.

The only one he would not exclude - other than malingering - was a possible mild to moderate "physical injury" which could exist yet still not show up on his MRI which came back normal.

Judge Siraj Desai asked if it were possible that Van Breda had not lost consciousness or been concussed. Du Trevou said this was possible.

Galloway asked whether he had examined the accused himself, and had seen all the evidence presented by the state.

The defence in the Henri van Breda triple axe murder trial could have re-analysed the DNA samples it claims weren't analysed properly by the state – ...
News
4 years ago

He said he had not, so Galloway asked if he had been asked to comment "blindly". He conceded that he had.

Du Trevou said that the motor cortex of Rudi's brain was intact and so it could not be excluded that he was capable of some very "limited" movement after the attack.

"I could say he could have moved. I can't say whether he did move," said Du Trevou.

It is very likely that his vision had been badly damaged, as well as his speech, the frontal lobe of his brain, and several other parts of his head and brain, but his brain stem and motor cortex (the area of the brain responsible for movement) were intact.

The state has repeatedly argued axe murder accused Henri van Breda’s wounds were self-inflicted which explains why they are so superficial.
News
4 years ago

It is possible that he "suffered convulsions" prior to death.

Du Trevou said "none of the cerebral injuries would have caused immediate death" but he would not take it further. He said he could not speculate on the time that elapsed between the attack on Rudi and his death: "I have no idea how long he could have survived after sustaining his injuries."

He said it was common cause that Rudi made "gurgling" sounds for some time after the attack, but this could not be attributed to an attempt to speak. It was far more likely that the sound was caused by air from his lungs making its way through blood that had pooled in his throat.