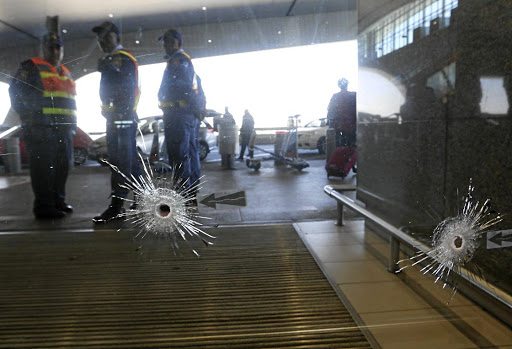 Bullet holes in the sliding doors at the departure terminal of Cape Town International Airport where a shooting took place.
Image: Esa Alexander

Nearly 20% of all the murders recorded in Western Cape were as a result of gang activity.

Head of crime statistics for SAPS Norman Sekhukhune said that 19.3% of the province's 3‚311 murders were linked to gang activity.

An analysis of the top ten so-called "gang stations" revealed that 79.1% of all murders reported at Steenberg were linked to gang activity‚ as were 78.5% of murders at Elsies River and 72.1% at Ravensmead.

Eighty-two deaths in Gauteng could also be linked to taxi violence.

Hostel violence accounted for 0.6% of all murders in KwaZulu-Natal.

Alcohol and drugs also played a role in murders‚ with the either the victim‚ the perpetrator or both having consumed alcohol in 34.4% of murder cases in Western Cape. Drug use was involved in about 3.3% of murders in the province.

In KwaZulu-Natal‚ alcohol use was reported in 18.5% of murders. 41 murders were reported in the province on Christmas Day 2016‚ and 47 on New Year's Day – both usually associated with high alcohol use.

The number of murders committed in 2016/17 increased 1.8% year-on-year‚ even though contact crimes as a broad category saw a drop of 2.4%.
News
3 years ago

A criminologist claims that an increase in arrests through police action is nothing more than a move to target the poor.
News
3 years ago

Mbalula: 'Lazy police are letting our people down'

Cape Town's deadly gang wars have spilt over into traditionally quiet and peaceful areas. While the Cape Flats have been ravaged by gang violence for ...
News
3 years ago

Two men, who were at Cape Town International Airport when an alleged underworld kingpin came under fire on Wednesday, described the "pandemonium" ...
News
4 years ago