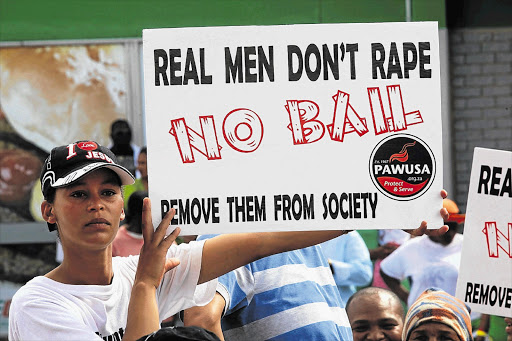 Sexual offences declined by 4.3% overall‚ and rape by 4%‚ according to the latest crime statistics.

A sample of 334 rape cases from the 30 main contributing stations revealed that 98.9 percent of victims were female‚ and 1.1 percent male.

Of the male victims‚ one third of the rapes recorded were male-on-male rapes.

WATCH | A look at the numbers: SA's hijacking and house-robbery hotspot provinces

9.1 percent of the victims in the sample were under the age of nine.

Police were also able to indicate that the most common places where the rapes occurred were at the offender's home‚ followed by in open areas such as streets‚ parks and fields‚ and in the victim's own residence.

Among the suspects‚ 50% consumed alcohol and 11.1 percent had used drugs before committing the crimes.

Police also indicated that 24.7 percent of the victims had consumed alcohol and 6.9 percent had used drugs before the attacks.

Questioned at a media conference afterwards why this data was relevant in the case of victims‚ acting police commissioner Lesetja Mothiba said he didn't know anything about the survey being quoted.

The 30 police stations where the most crime was reported

The majority of the police stations where the most crime was reported in the past financial year are in Western Cape and Gauteng.
News
4 years ago

Mandela's granddaughter reveals she was raped in her own bedroom

Former president Nelson Mandela's eldest granddaughter has joined a growing list of women around the world who have bravely exposed falling victim to ...
News
4 years ago

Suspect in court for alleged rape of four-year-old girl

A 21-year-old man accused of raping a 4-year-old girl appeared in the Johannesburg Central Magistrate’s Court on Monday.
News
4 years ago