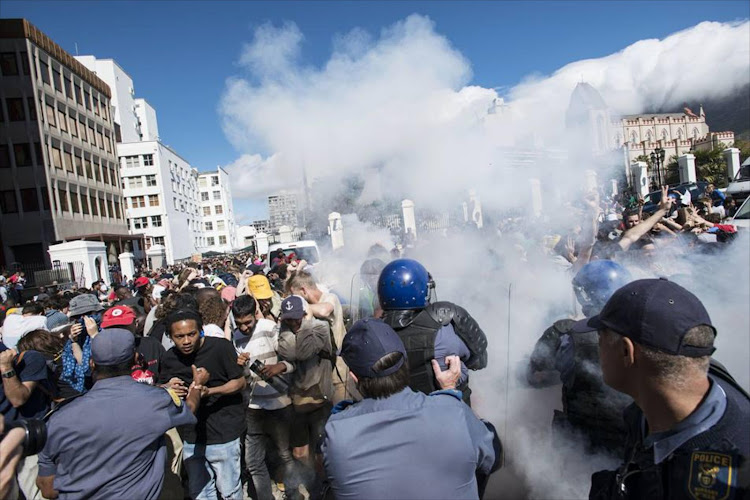 The University of Cape Town went to court on Thursday afternoon‚ aiming to halt protests that have closed the institution.

UCT’s application for an urgent interdict was due to be heard in the High Court in Cape Town at 3.45pm.

It followed a university announcement that classes had been scrapped on Thursday and Friday following protests by students calling on President Jacob Zuma to release a report on tuition fees.

Alarms were tripped and students were chased out of classes as protesters made their way through campus. In addition the institution’s shuttles were prevented from leaving depots.

Multiple blockades were set up on the upper‚ middle and lower campuses.

A lunchtime mass meeting‚ which attracted only 200-300 students‚ resolved to reject the presence of private security guards on campus. It also called on UCT management drop charges against students who took part in Fees Must Fall protests on campus in the past.

Student Representative Council spokesman Sihle Lonzi said: “It is not a mistake that black students are getting financially screwed by the institution. There is a privileged minority in this country.”

SRC members and student leaders planned to meet the senate on Thursday to discuss several issues‚ including the presence of private security on campus.

“They give themselves 15% bonuses but they cannot find solutions for the institution.”

Simone Cornelius‚ SRC student advocacy co-ordinator‚ said at the meeting with the senate they would also raise the fact that “it is unacceptable that cafeteria workers earn R3500 when some of them have big families to look after”.

Rogue unit of students and staff behind CPUT violence

The violence and disruption at the Cape University of Technology campuses has been caused by a rogue unit of “naive” students and staff members.
News
4 years ago

A judge has dismissed an attempt to overturn Stellenbosch University’s new language policy‚ which dispenses with Afrikaans as the primary language of ...
News
4 years ago

Protesting UCT students won't back down

At a mass meeting at the University of Cape Town on Thursday protesting students resolved to reject the presence of private security on campus. They ...
News
4 years ago