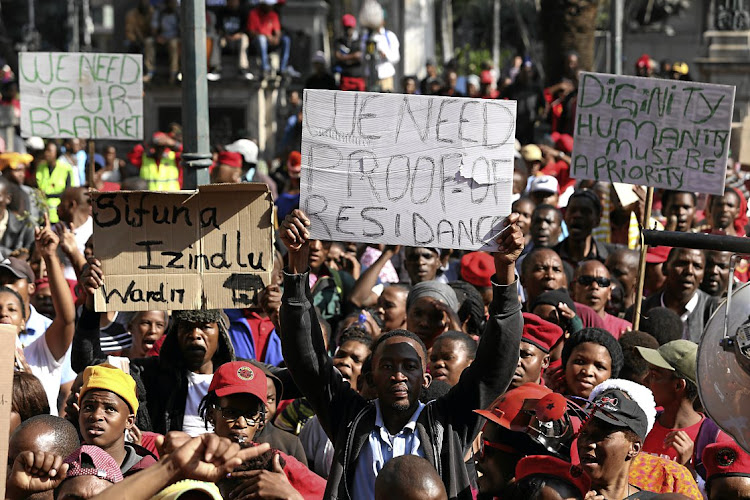 Sporadic skirmishes between police and members of the Abahlali baseMjondolo Shack Dwellers movement continue in Cato Manor with the latter crying foul over “torture” in police custody.

A small patch of the land near Blinkbonnie Road in the township has been a staging area for repeated clashes over the erection of shacks. Several Abahlali baseMjondolo members are protected by a Durban High Court interdict preventing the eThekwini Municipality from destroying their homes.

Others‚ however‚ find themselves going head to head with members of the City’s Land Invasion Unit.

On Friday members of the unit swooped and demolished homes‚ prompting a violent backlash from the community. According to a statement issued by Abahlali baseMjondolo‚ the unit staged a “brutal attack”.

“Once again they destroyed and burnt people’s homes and possessions and engaged in serious assault.

They said that they would continue to resist and that the land would be held.

Police spokesman Thulani Zwane strongly denounced claims that members of the shack dwellers movement had been abused while in detention.

“No one has been tortured while at the police cells. They can report such incidents to the station commander who always visits police cells to check upon awaiting-trial prisoners‚” he said.

“Today [Friday] there were four suspects who were arrested for malicious damage to property and they will appear in the Durban Magistrate’s Court on Monday‚” Zwane added.

Independent Police Investigative Directorate (IPID) spokesman Moses Dlamini said that matter had not yet been reported to their detectives.

He said he would monitor the situation.