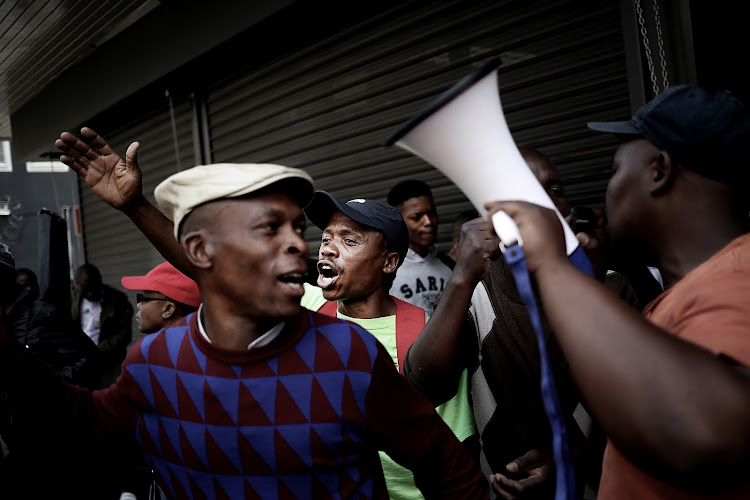 Police have been called to the offices of the Private Security Industry Regulatory Authority (PSIRA) in the Johannesburg city centre‚ after protesting security guards blocked the entrance on Monday morning.

The guards are members of the African Security Congress (ASC)‚ a political organisation formed by security guards themselves.

Teboho Motloung‚ the president of the ASC‚ said the march was organised to make the call for security guards to be directly employed by the state‚ instead of the private sector‚ which they allege exploits them.

“The main objective of this protest is for the security industry to be moved from private sector to public sector and be totally owned by the state. We get trained by private security companies and get certificates. After paying for that certificate‚ we still have to pay PSIRA a fee every month‚ and we don’t know what the fee is for. We have asked so many times what the fee is for‚ and PSIRA has failed to explain‚” Motloung said.

The fee is about R7 a month‚ and there are about three million security guards working in the country. The certificate from PSIRA expires after 18 months‚ and has to be renewed at a cost of R20‚ Motloung explained.

“PSIRA makes R21-million a month‚ which amounts to R252-million per year. Our problem is that PSIRA only has one office here in Gauteng where guards can go and [access] its services. Nationally‚ they do not have regional offices in other provinces. This means people have to travel long distances to get services from the organisation... We want to know where this money is going to‚” he said.

Motloung said security guards contribute to a provident fund and UIF‚ and added that they work under difficult conditions.

“Security guards sometimes get injured. They also easily lose their jobs when companies lose contracts. PSIRA is doing nothing about the plight of the workers. What we want is for government to directly hire security guards‚ and these private contracts to come to an end.

“Most of the time‚ PSIRA is protecting the interest of the employers and not the workers – who pay money every month to the organisation. This is why we are gatvol with PSIRA. Today we were just here to warn them – that a day is coming when we are going to shut down not only this office‚ but also their national office in Centurion‚” Motloung warned.