Van Breda sticks to his guns - but without a stutter 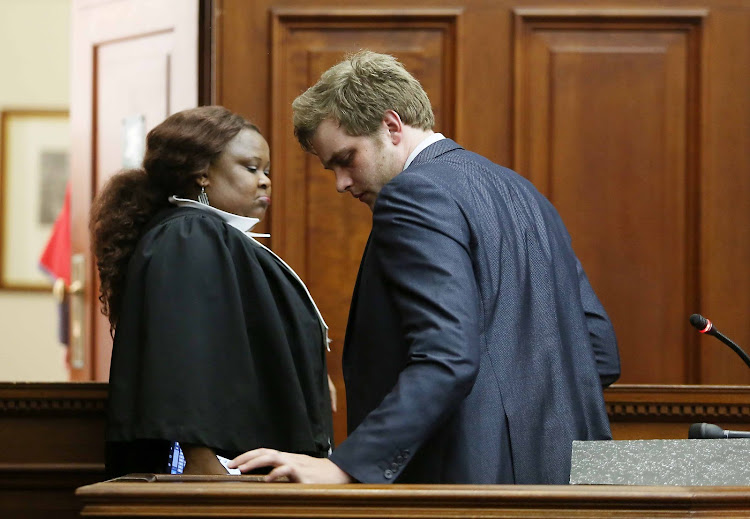 If Henri van Breda has a stutter‚ it was missing in action on Tuesday.

A day earlier‚ the triple axe-murder accused’s defence counsel‚ Piet Botha‚ painted a picture of a young man with a speech impediment that was “much worse” when he was “under pressure”.

Botha had applied for the live-streaming cameras to be turned off during Van Breda’s testimony in the High Court in Cape Townb on the grounds that he would “stutter”‚ “mumble” and “hesitate”‚ and that this could work against him.

Judge Siraj Desai denied the application‚ and when Van Breda stepped into the witness stand on the 55th day of his trial — and on the eve of his 23rd birthday today — his demeanour and skills of articulation appeared to be the direct opposite of the description given by Botha.

When state prosecutor Susan Galloway began her cross-examination in the afternoon‚ her first salvo was a blunt statement rather than a question: “Mr Van Breda‚ I did not hear you stutter at all. Not even once.”

Earlier‚ Van Breda calmly and confidently described his “close-knit” family that enjoyed the outdoors and who had had a “normal” night at their home in Stellenbosch before the bloody killings unfolded on January 26‚ 2015.

Giving a paint-by-numbers testimony that adhered to every detail of his plea statement‚ Van Breda described the angle at which an alleged attacker had held the knife which he said was used to cut his chest and arms‚ and described his brother Rudi’s flailing around as he gurgled on the bed after the attack as being “violent rather than goal-orientated movements”.

He flatly denied killing his parents and Rudi‚ and attempting to kill his sister Marli‚ and said the police officers who took a statement from him did not explain that it would “become a legal document”.

Botha asked him: “Did you attempt to wash away any blood from your hands or body on that morning?”

“Why did you not come to the aid of your dad and your mom and your brother?” Botha asked twice. “Would you like to try and explain?”

‘I did not giggle’ – van Breda

Outwardly calm‚ but sweating and controlling his breathing‚ Henri van Breda repeated minute details of his plea statement like a paint-by-numbers ...
News
3 years ago

“I wish I could. I wish I did. But I was too scared‚” said Van Breda‚ adding that he regularly sees a therapist.

Under cross-examination‚ when asked about the family dog‚ Sasha‚ he said she had not barked as she was on medication for a stroke which rendered her deaf for one week of every month.

He said his own blood found in the shower at the family home in Goske Street‚ on the luxury De Zalze estate‚ was perhaps from him “shaving in the shower”‚ and that he had “never before seen the axe” that was found at the scene of the murders.

When Galloway asked him questions on the level of security at the estate‚ he conceded it was tight and that the family had always felt “very safe” and had “slept with the doors unlocked”.

He could offer no explanation as to how the alleged attacker — a black man in a “homemade” balaclava who had an accomplice somewhere in the house and who had “laughed” while attacking his father — got into the house under such tight security.

“So what you are saying‚” said Galloway‚ “is that these attackers managed to get over or through or around the fence of the fortified estate undetected‚ before making their way across the estate to your home‚ which is in the middle — still undetected — and then enter your house where they took nothing‚ went upstairs‚ killed your family members‚ attacked you‚ and then fled‚ with nobody hearing them leave?”

Van Breda said yes‚ adding that he had “no comment” on why no breach of security was evident.

Van Breda tells his side of the story

Day 54 of the Henri van Breda axe murder trial‚ and finally‚ the accused is telling the story from his perspective – complete with details of a ...
News
3 years ago
Next Article