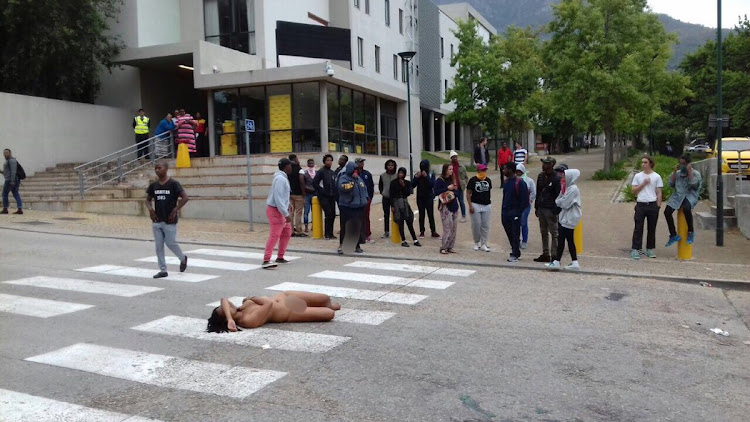 The stomach-churning stench of human faeces‚ piles of rubbish‚ ripped curtains and a commotion on campus as the woman was being dragged into a police van greeted students on Thursday.

Parts of the campus were sealed off by police in riot gear and private security and at least three people were arrested.

Police spokesperson Captain FC Van Wyk confirmed that a 23-year-old woman was taken to hospital and would be charged for public indecency. She collapsed while being taken into custody.

“The students were blocking the road in Baxter Street. SAPS gave them several warnings to disperse but to no avail‚ after 30 minutes a male and female student were undressing themselves and lying naked in Baxter street. They were also warned and then arrested‚” said Van Wyk.

Some students have called for a shutdown until their demands are met for a 0% fee increase for the 2018 academic year. They also want a commission of inquiry into suicides at the institution‚ a full report on campus security expenses and the scrapping of historical debt. They also called for the immediate release of the Fees Commission report by President Jacob Zuma.

After humiliation that lasted for almost two centuries, Sarah Baartman could soon be honoured by the University of Cape Town.
News
4 years ago

UCT vice chancellor Max Price said at a media briefing on Thursday: “There has been a group of 200 students trying to shut down campus since last night. In spite of disruption by a small group of students‚ campus is open. We utterly condemn the protest.

“There has been disruption in residence and the catering services. Protest is utterly unacceptable‚ especially this time of year.

“The demands that are currently being placed to us do not seem to be reasonable. The 0% increase is beyond us. We would go bankrupt if we don’t increase fees.”

Professor Daya Reddy warned that the “consequences will be quite dire if we don’t complete the academic year”.

Student Representative Council corporate relations officer Sihle Lonzi told TimesLIVE that one of those arrested was a naked woman involved in the protest.

“She was doing a naked demonstration on the zebra crossing. The police came to arrest her and she fainted. Medical services were then called.”

“Police attempt to arrest an unconscious woman‚” tweeted online campus news site Vernac News – which had earlier posted images of the protesters lying on the road with the caption: “Bodies on the line. Guns out. #UCTShutDown.”

But student newspaper Varsity posted in a later update that the arrested woman “was part of a protest art installation which is why she was not clothed. After being picked up for arrest‚ the student seemed to have suffered emotional distress which lead to what seemed to be her fainting. An ambulance was called and the student in the video has been taken to hospital.”

UCT has been granted a temporary court interdict barring unlawful protest action on campus‚ damaging of property or disrupting classes and examinations.

Ashleigh Petersen‚ a second-year psychology student‚ did not agree with the dumping of faeces. “I think it’s very disgusting. They don’t think about the cleaners that have to clean all these things.”

A third-year biological sciences student‚ who requested not to be named‚ told TimesLIVE: “It is not right. I don’t know where they get faeces from actually. It’s not right to throw it where people work and frequent.”

The University of Cape Town went to court on Thursday afternoon‚ aiming to halt protests that have closed the institution.
News
4 years ago

Electrical engineering student Richard Masson said: “Regardless of how we think this needs to play out‚ using faeces and stuff like that‚ that’s not how you get people on your side as a movement. All you are really doing is causing even more of an issue for the workers.”

Earlier in the day the Jammie shuttle service was temporarily disrupted due to vandalism. Vehicle tyres were slashed. Barricades were placed across some roads.

“Excrement has been poured in the Snape‚ Robert Leslie and Computer Science buildings. Cleaning teams have been arranged‚ but lectures may be delayed as a result. Course conveners will make alternative arrangements as required‚” said a statement from UCT.

“Test and exam venues are being protected‚ so tests and exams will go ahead as scheduled.”

Students who were arrested were taken to Rondebosch police station.