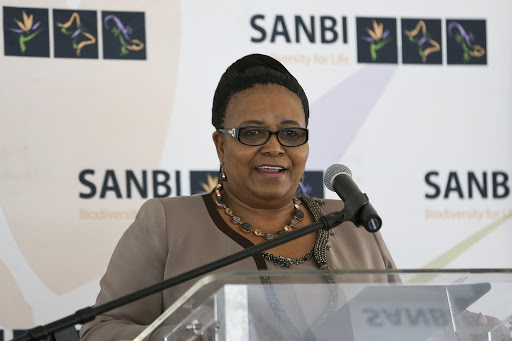 Rhino poaching is on the decline‚ but other species are under threat‚ like elephant‚ the quirky pangolin and even the rare cycad plant.

In fact‚ one Eastern Cape man seems to be a serial cycad siphoner. It appears that the perpetrator is a farmer‚ who ended up forfeiting two vehicles and part of his farm to a neighbouring national park.

These are some of the revelations made by the Department of Environmental Affairs (DEA) on Monday. The stats form part of the 2016/17 National Environmental Compliance and Enforcement Report (NECER).

Environmental Affairs Minister Edna Molewa announced in February that there had been a decline in the number of rhinos poached in the country.

David and Esme snuggle‚ follow each other around and he's her fierce protector.
News
4 years ago

Deputy Minister of Environmental Affairs Barbara Thomson said: "It is through the work of the Green Scorpions‚ amongst others‚ that government is working hard to protect the integrity of the environment for the benefit of current and future generations."

But other fauna and flora are also being targeted.

One case in particular stands out in the NECER: The state versus R Dicks & 3 others. "Theft and illegal harvesting of bakkie and trailer full laden with Longi Folius cycads‚" reads a description of the crime.

The same name pops up in another case involving a similar crime. This time it appears R Dicks was happy just to facilitate the crime‚ rather than merely partaking.

"Whilst the accused was (awaiting trial) on a previous case‚ he allowed another accused to pick cycads on his own farm‚" the NECER notes.

The sentence included a 10-year jail term‚ suspended for five. He was also slapped with a R100‚000 fine and had to forfeit his bakkie‚ a R 80‚000 truck‚ and donate part of his farm to the Addo Elephant National Park.

All in all‚ 1‚526 dockets were registered in the reporting period‚ and 1‚092 arrests were made by the Green Scorpions. The National Prosecuting Authority (NPA) received 416 dockets and the number of convictions increased from 52 to 76.

SANParks made 311 arrests‚ the Limpopo economic development department made 310 arrests and Ezemvelo KZN Wildlife made 136‚ accounting for 69.3% of all arrests.

The most common environmental crimes included illegal hunting‚ trespassing‚ and "listed" activities that pose a threat to the environment.

The longest direct prison sentence was handed to Simon Ngomani‚ who received 28 years after trespassing and hunting two rhinos with an illegal firearm and ammunition in Limpopo.

The heaviest sentence for pollution and waste was against Heidinge Waste Removal‚ who was fined R1 million or a suspended sentence for five years. They were also ordered to pay a further R100‚000 to the DEA.

Thirty-six suspects have been arrested in the past three weeks in connection with crimes related to rhino poaching, police said.
News
4 years ago

The majority are employed by SANParks (859)‚ Ezemvelo KZN Wildlife (661) and Limpopo economic development (259).