'It would spell disaster': Experts slate R40bn scheme by Zuma's future son-in-law for no-fees education across the board 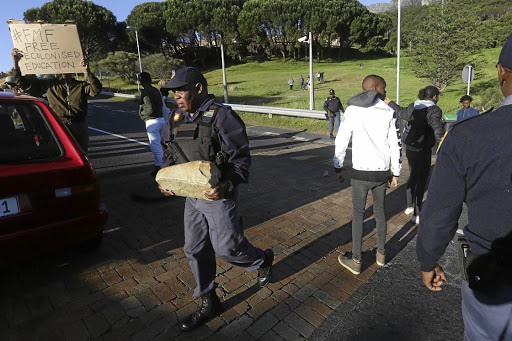 UNBLOCKING LEARNING A police officer removes rocks from the entrance to UCT, which was blocked by students during their fees must fall protest on Tuesday
Image: Esa Alexander

If President Jacob Zuma moved ahead with an alleged plan to announce free education across the board through a controversial funding scheme it would spell disaster for the country, a leading educationalist said.

TimesLIVE on Tuesday exclusively revealed that the plan, apparently devised by Zuma's future son-in-law, Morris Masutha, and which would also fly in the face of official ANC policy, could see the cutting back of departmental budgets across the government to make R40-billion available for the 2018 academic year.

Leading educationalist Jonathan Jansen said, for universities, fees were a recurrent cost that had to be paid from government coffers.

"There are over one million people every year and growing who will expect free education as of right. We don't have money for this recurring expenditure."

Jansen also said submissions made to the Heher Commission showed that fee-free higher education was not attainable at present.

"I think the idea of fee-free higher education for all is fundamentally unfair. Kids who are rich and can pay must pay and those who cannot afford but are eligible should not pay.

"Let us hope the speculation that the president will announce free higher education for all is wrong because it is unsustainable."

Masutha, engaged to be married to Thuthukile Zuma, the president's youngest daughter from his marriage to Nkosazana Dlamini-Zuma, referred questions to the national Treasury.

Protesting students had a brief stand-off with police after disrupting a test and chasing students from a computer laboratory on Monday at the ...
News
3 years ago

"I think you might want to get input from those respective departments (Presidency, Higher Education and National Treasury) ... and not me personally," he said.

The Presidency said Zuma had no announcements scheduled imminently.

Masutha, who has apparently acted as Zuma's "point man" on the fees issue, has made presentations to ANC officials and an inter-ministerial cabinet committee on his self-devised funding plan, which essentially revises the national Treasury's entire budget.

It is understood that following Zuma's sudden cabinet reshuffle last month, Masutha was introduced to the new Higher Education and Training Minister and deputy minister, Hlengiwe Mkhize and Buti Manamela, as the president's "adviser".

Zuma has apparently assigned Minister in the Presidency Jeff Radebe and his director-general, Mpumi Mpofu, the task of implementing the plan, which requires cutbacks in departmental budgets to make funding available. Mpofu, appointed in July, is said to have been working with a team from the Treasury to "find the money for Zuma".

A government insider said the matter was dealt with directly by the director-general outside of the ordinary work of the department.

If the plan is moved on it is likely to cause chaos throughout the state system as budgets are allocated according to programmes.

Student leaders cancelled a march to parliament to force President Jacob Zuma to release the fees commission report - because they had to study for ...
News
3 years ago

It also undermines Finance Minister Malusi Gigaba's statements when he presented the medium-term budget policy statement last month. He said a funding shortfall of more than R61-billion over the next three years would be created if government were to finance the full cost of study for 40% of undergraduates.

He said further announcements on higher-education funding would be made in the February budget.

Sources say Zuma has disregarded the national Treasury and the Heher commission's findings and believes his future son-in-law has found a solution to the crisis.

Kefentse Mkhari, a former Wits University SRC leader, who was part of the #FeesMustFall protests last year, said if Zuma were to implement fee-free education as reported, it would be a "victory for us".

Mkhari said there had been numerous reports on the Heher Commission and student activists would wait for the official announcement before celebrating.

Sthembiso Ndlovu, the SA Union of Students secretary-general, said it would also wait for an official announcement before commenting.