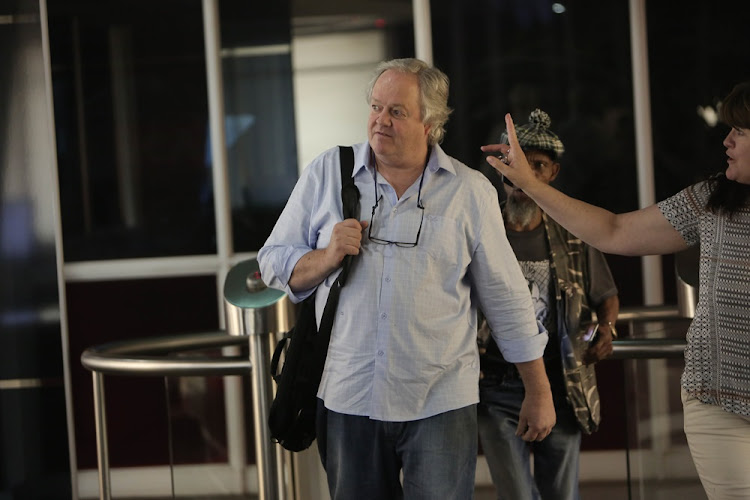 TimesLIVE understands the charges against Pauw, author of the controversial book The President's Keepers, were laid at Lyttleton police station in Pretoria.

"The SSA were at the police station yesterday (Wednesday). They were asking a lot of questions and there were discussions about this matter," said a source.

The charges were initially believed to have been laid on Thursday, but it has since emerged that it happened on Wednesday already.

Pauw said via WhatsApp that he was not aware of the charges.

Dlamini said he was not yet sure what docket had been opened or what the charges related to, and asked that TimesLIVE contact him later on Thursday afternoon.

Pauw's book, which was released a week ago and later leaked on social media, has been at the centre of a row with the SSA and the South African Revenue Service.

It contains damning allegations about President Jacob Zuma and key state agencies. The SSA has said its contents contravene the Intelligence Services Act.

The security agency had notified Pauw and NB Publishers several days ago that it would pursue legal action against him as it pushed for him to retract certain parts of the book and to have it removed from circulation.

But Pauw and his publishers refused to bow to the pressure. His lawyers said they were willing to take the matter to court.

The book, meanwhile, has sold out and the publisher has rushed to print more to meet demand. It is a global best-seller on Amazon and the fastest-selling book in South Africa since official Nielsen data began in 2004, the publisher says.

“If you don’t stop writing about Jacob Zuma‚ you are going to be dead.”
Politics
4 years ago

On Tuesday, NB Publishers issued a statement saying it noted death threats made against Pauw with "grave concern".

"We view this in an extremely serious light and are taking steps to ensure his safety at all times. We will take legal steps against anyone making such threats," it said.

Willem de Klerk, a lawyer for both Pauw and NB Publishers, wrote to the SSA on Monday and said it was illogical for it to demand the shelving of the book, which has already been widely circulated.

“Your demand for a retraction ‘of all those parts which are inaccurate’ is therefore incongruous. It is further unclear how you reconcile an allegation of falsity, on the one hand, with an alleged violation of statutory provisions on the other,” De Klerk said in a letter sent to the SSA.

It was unclear whether the South African Revenue Service would also join the SSA in its bid to muzzle Pauw.

The revenue service had accused him of violating tax laws when he revealed that Zuma had failed to submit tax returns for years after he became president, despite the service trying to get him to do so.

The State Security Agency (SSA) is considering its next move after former investigative journalist and author Jacques Pauw refused to withdraw his ...
Politics
4 years ago

NB Publishers will not desist from making Jacques Pauw's book The President's Keepers available to the public‚ will not withdraw it from the market ...
News
4 years ago

As the author and publisher of an explosive book revealing South Africa’s “shadow mafia state” prepare for a showdown with government agencies The ...
Politics
4 years ago

IN FULL: 'President’s Keepers' compromises the security of the State‚ says spy agency

The State Security Agency (SSA) has told the publisher of The President’s Keepers to cease and desist from printing more copies of Jacques Pauw’s ...
Politics
4 years ago