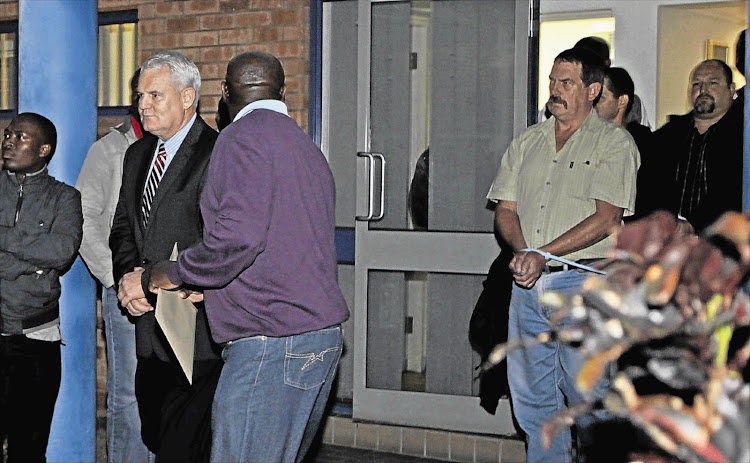 It'll be another year before the so-called "Cato Manor death squad" police officers appear in court after their case was postponed in the Durban High Court on Friday morning.

It took less than a minute for Judge Shyam Gyanda to postpone the appearance of retired KwaZulu-Natal Hawks head Johan Booysen and 28 police officers to October next year. The squad‚ based at the Cato Manor police station in Durban‚ were appearing on murder and racketeering charges.

In a shock move‚ National Prosecuting Authority head Shaun Abrahams last year reinstated the charges despite a decision by the high court to drop them.

This is the latest instalment of a protracted trial that has dragged on for more than five years.

But Booysen‚ clad in a navy suit‚ blue shirt and red tie‚ and the other squad members looked relaxed in court and chatted to one another.

The squad faces a litany of charges including the murder suspects during the course of their arrests. They allegedly killed these suspects and planted weapons to create the impression that the killings were justified.

On Friday Booysen told the media outside court that he hoped that various issues would have been dealt with by then “so that we can move forward with this matter".

He said Abrahams re-authorised his prosecution based on the same facts used by former deputy national director of public prosecutions Nomgcobo Jiba — a matter he took on review in the high court‚ which ruled in his favour and set aside charges against him.

“Subsequent to that advocate Abrahams re-authorised my prosecution based on the same facts and he also belatedly signed a new authorisation for the rest of the Cato Manor guys whilst Jiba’s authorisation was still in place‚” said Booysen.

“So we’re taking that decision on review‚ and the fact that he has decided to authorise my prosecution once again and the fact he saw it fit to issue new certificates for the rest of the Cato Manor guys in spite of the fact that there was no authorisation by Jiba.”

In his explosive book “The President's Keepers: Those keeping Zuma in power and out of prison"‚ investigative journalist Jacques Pauw has revealed that the Guptas tried to capture Booysen in 2015.

Pauw wrote that Booysen was driven to the Gupta family home in Saxonworld in Johannesburg by Zuma’s son Duduzane in a Rolls Royce.

Booysen was told that he would soon become the new head of the Hawks by Tony Gupta. His son Eben Booysen was offered an opportunity to talk to the Guptas if he had any business ventures that needed to get off the ground. He declined the offer

Asked on Friday why he had decided to leave out that information in his tell-all book “Blood On Their Hands”‚ Booysen said: “At that particular time you would recall that I was still in the police and you don’t have to be a rocket scientist to realise that how I have been persecuted for trying to expose corruption.”

He said that before he retired his immediate commander was former Hawks boss Berning Ntlemeza‚ “whom I had quite a contentious relationship with". He accused Ntlemeza of being “hellbent of getting rid of me".

"I don’t know why. So I could not report it to him. I had to keep it quiet. I didn’t intend exposing that.”

But‚ the day after Ntlemeza was removed by the Supreme Court of Appeal Booysen submitted an affidavit to the acting Hawks head‚ Lieutenant General Yolisa Matakata.

“So the reason I did not talk about it in my book is two-fold: I didn’t want anyone to know about it. Unfortunately someone at the Hawks leaked it to Jacques Pauw and he confronted me about that and I conceded that I had in fact been to the Gupta’s compound.”

But Booysen said he did not want to go to the details of what was discussed at the Gupta house.

“I’ve made an affidavit. So if there is going to be an investigation‚ I would not like to compromise that investigation‚” he said.

High-ranking KwaZulu-Natal policeman and former Durban Hawks boss Colonel Rajen Aiyer was arrested on Wednesday on charges of defeating the ends of ...
News
3 years ago

The state will have to pay damages to the family of a taxi boss killed by members of the police's disbanded Cato Manor organised crime unit. The ...
News
6 years ago

The cash-strapped family of a Durban taxi boss who was allegedly assassinated by the notorious Cato Manor organised crime unit is suing the minister ...
Lifestyle
7 years ago

A police reservist formerly embedded in the notorious Cato Manor organised crime unit has become the first insider to publicly break ranks on the ...
News
8 years ago

A police reservist formerly embedded in the notorious Cato Manor organised crime unit has become the first insider to publicly break ranks on the ...
Investigations
8 years ago
Next Article