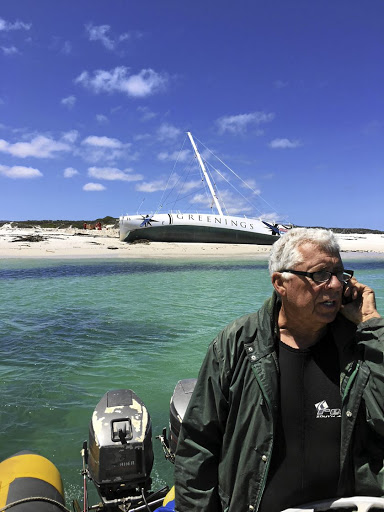 Attempts to salvage a R100-million yacht that crashed into rocks near Cape Point have been blocked because the boat has washed up on a protected beach.

The process has been further delayed by a wildfire that came within a few hundred metres of the state-of-the-art racing yacht.

The boat is owned by the Clipper Round-the-World Race organisation, whose 12-yacht event rounded the Cape two weeks ago.

It ran aground on a reef near Olifantsbospunt after an apparent navigational error.

Cape Town salvage diver Gary Mills claims officials should have acted sooner to salvage the yacht while it was wedged on a reef.

Now it is on the beach and marooned by bureaucratic wrangling.

Its location in Table Mountain National Park means it is subject to environmental legislation prohibiting potentially damaging activities - such as the use of heavy machinery.

"Our objective is to remove [the yacht] as soon as possible and minimise any environmental effect," he said.

"The boat had its fuel removed, removing the risk of contamination.

"Ultimately there will need to be a judgment call by the authorities on the least-invasive recovery method."

Cape Town's maritime community woke up to a conundrum on Wednesday: how did a world-class ocean racing crew with state-of-the-art technology run ...
News
4 years ago

Justin Buchmann, Table Mountain National Park senior section ranger, said: "The salvage company is removing loose equipment. However, the operation has been delayed as a result of vegetation fires.

"SANParks will ensure the final plan adopted considers the sensitive nature of the environment."

Mills said the need to salvage the yacht should trump environmental legislation - in the interest of the environment.

"By them creating this difficulty the yacht becomes not only a navigational hazard but also a pollution hazard," he said, adding that the SA Maritime Safety Authority had tried in vain to intervene on behalf of the salvors.

The yacht was now vulnerable to looters, Mills said.

"The kind of co-operation we are getting from the government is absolutely embarrassing from an international perspective."