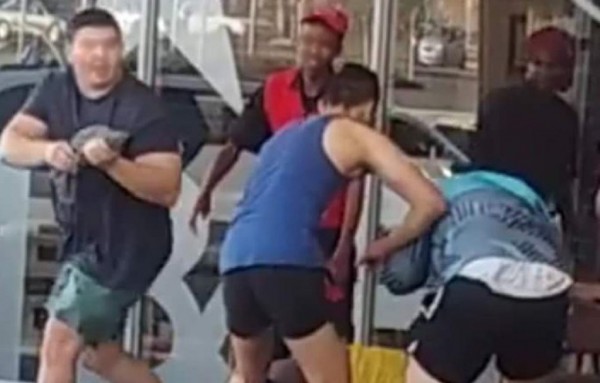 South Africans have no respect for law enforcement officers‚ says a metro policeman who was recently a victim of violence.

Landile Zwedala believes the public's disregard for officers explains why a church congregation could recently fearlessly attack an armed police officer in broad daylight in Johannesburg.

Zwedala‚ who has been with the Tshwane Metropolitan Police Department for two years‚ was recently assaulted by a group of men near a Mugg&Bean restaurant at Tambotie Mall in Randfontein.

Battle Churchgoers fight police and metro officers because they towed away an illegally parked car, one cop badly hurt
News
3 years ago

Zwedala is also a law enforcement officer and he had his service pistol when he was attacked on November 4.

Four men turned on him after he tried to defuse an altercation involving the men and an unidentified motorist at the mall's parking lot.

"I was in one of the stores with my wife when I noticed a group of white men attacking a black man in the parking area. I left my wife and ran towards the group‚ hoping to stop the fight‚" said Zwedala.

Having failed to contain the situation in the parking area‚ Zwedala opted to run inside the mall to call for backup. The four men followed him into the mall.

His sprint to the mall was cut short by a bystander‚ who tripped him‚ giving the group a chance to repeatedly punch and kick him while he was on the floor.

"Those guys knew that I am a police officer and I was armed when they assaulted me‚" Zwedala said.

"They were not even bothered that some bystanders were recording the incident with their cellphones. It's unfortunate that we have reached this stage‚ but police officers are not respected by anyone in this country."

The officer has been on sick leave since the attack and planned to report for duty on Tuesday morning. His attackers have left him with bruises on the head and a bloodshot eye.

"I was discharged from hospital last week. There is a bit of pain in my right eye but I am ready to go back to work‚" he said.

"I joined the service because I love being a police officer and I will not resign anytime soon."

Zwedala's firearm was taken by his wife while he endured the beatings from the mob.

Two men were arrested after the attack. They were released the following day.

The men were due to appear in court last week for assault but the prosecutor was not ready.

"The case was not placed on the court roll. The prosecutor decided that they need more evidence. Further investigation is being conducted‚" said Randfontein police spokesperson Captain Appel Ernst.

Zwedala has opened a case of assault with intent to do grievous bodily harm with the local police.

His case will appear in court on November 23.

He said he hopes the court will punish the suspects for their action‚ which has the potential to divide South Africans.

"I am aware that a number of people believe this was a racial attack and they are mobilising certain sections of the community to boycott Tambotie Mall and the fitness centre where one of the suspects is employed‚" Zwedala said.

"I've handed everything to the court. I hope the legal system won't fail me."

The person that Zwedala was trying to assist has been traced but has refused to provide information to the police on what transpired on the day.

Bystanders who recorded the incident have not come forward to assist the police.

Mugg&Bean has handed its CCTV footage to the police.

Rand West City Local Municipality mayor Mzi Khumalo has condemned the attack and appealed to residents who witnessed the incident to work with the police.

"It defeats our purpose to seek justice in this matter while we have witnesses who are not prepared to avail information‚" Khumalo said.

"There can be no justification for the amount of violence and aggression seen from the video. What is further distressing is that the aggressors had no qualms about beating a defenceless individual in the presence of his wife."

Police have dismissed speculation that the man who was recently attacked near a Mugg & Bean store at Tambotie Mall in Randfontein is dead.
News
3 years ago

Mugger alert: Street robberies up by 38.6% over five years

A cop killed every four days in SA

A police officer is murdered every four days in South Africa. And 712 have been attacked this year - 81% of them while on duty. This is according to ...
News
5 years ago