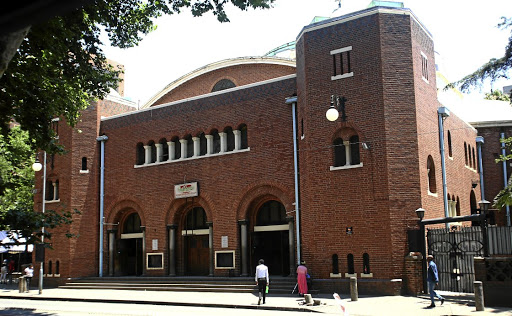 GO IN PIECES: The Revelation Church of God in Hillbrow where community members attacked and disarmed a metro police officer who was towing a car that was illegally parked.
Image: Masi Losi

A car parked illegally outside a Hillbrow church has placed a Johannesburg congregation on a collision course with authorities after churchgoers beat up a metro police officer, who landed up in hospital.

On Sunday a video emerged of police and metro officers in an altercation with church members at the entrance of the Hillbrow Revelation Church of God church on Claim Street. The metro cop was allegedly beaten and knocked unconscious outside the church. He sustained head injuries and was taken to hospital. He was discharged on Monday.

The ministry has defended its members.

On its Facebook page the church said: "Instead of police helping to remove squatters from our land, they choose to attack church members with shootings & paper [sic] sprays. This is the freedom we fought for, for our own people to attack us."

Metro police said on Sunday that one of its officers and a tow-truck driver were attacked by members of the church in Hillbrow.

The city said the attack took place when the two officials hooked up an illegally parked car, belonging to a member of the church, because it was causing traffic congestion.

It is believed the metro police officer drew his firearm and fired into the air to stop rioting congregants from advancing towards them, but the crowd did not heed the warning and proceeded to attack the officer.

The mob overpowered and disarmed the officer, who was beaten and left unconscious and had to be rushed to Milpark Hospital.

Two of the congregants were arrested when the metro officer's firearm was handed to the Johannesburg Central police station.

"We will not allow this attack on our metro police to go unprosecuted; the culprits will have to face the full might of the law," said Sun.

The church is housed in what used to be the Park Street Synagogue, Johannesburg's first synagogue, and has one of the largest congregations of any central Johannesburg church.

Administration staff members at the church were unwilling to speak to The Times, referring queries to a woman named Celeste. She did not answer calls and she did not reply to text messages either.

Residents told The Times: "You have to leave. These people can stone you to death."

In 2015 Radebe refused to appear before the Commission for the Promotion and Protection of the Rights of Cultural, Religious and Linguistic Communities during its investigation of the commercialisation of religion.

In one of the services screened on YouTube, Radebe can be seen sitting in his chair with a spear between his legs, while people "give testimonies" about how their lives changed after attending one of the church services. Other congregants can be seen with wooden spears and their trademark blue T-shirts.