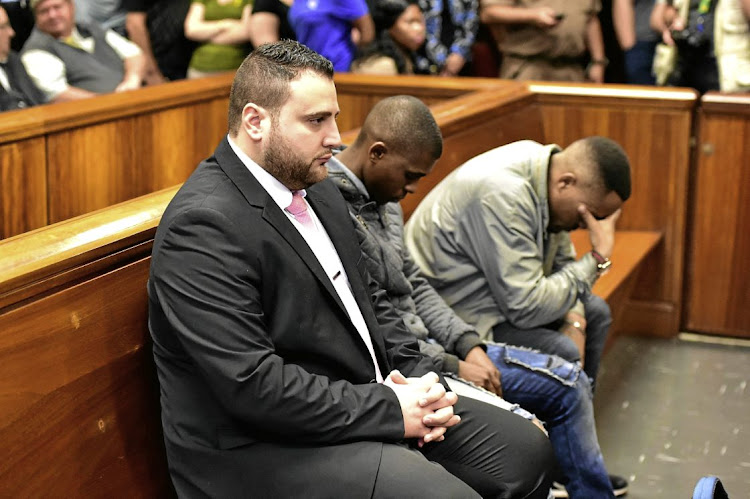 IN THE DOCK Port Elizabeth businessman Christopher Panayiotou is found guilty of the murder of his wife, Jayde. in the Port Elizabeth High court.
Image: Eugene Coetzee/The Herald

Port Elizabeth businessman Christopher Panayiotou's sentencing proceedings are scheduled to get under way today‚ for orchestrating the kidnapping and murder of his schoolteacher wife‚ Jayde.

Defence Advocate Terry Price SC has indicated that he intends bringing an application for leave to appeal against the conviction.

Uitenhage teacher Jayde‚ 29‚ went missing from outside her home in Kabega Park‚ Port Elizabeth‚ on April 21 2015. Her body was found in KwaNobuhle the next day.

In the judgment handed down on Panayiotou’s 31st birthday earlier this month‚ Judge Chetty convicted him of murder‚ while hitman Sinethemba Nemembe‚ 28‚ was found guilty of murder and robbery with aggravated circumstances‚ and Zolani Sibeko‚ 35‚ was found guilty of conspiracy to commit murder.

Chetty said an inference could properly be made from the gun residue found on her hand that‚ in her final moments‚ she had begged for mercy.

“That act of supplication‚ however‚ elicited a bullet to her head. The medical and ballistic findings compel the conclusion that this was an execution-style murder.”

The breakthrough in unmasking the key figures in her murder came on April 27‚ when Captain Willie Mayi‚ the head of the SA Police Service’s vehicle hijacking team‚ received a call from an informer. This ultimately led him to middleman Luthando Siyoni.

It was the state’s case that Siyoni was intimately involved in securing Jayde’s assassin. However‚ when he entered the witness box‚ he claimed he was tortured and forced to implicate his former boss.

Turning to the sting video in which Panayiotou and Siyoni candidly discussed Jayde’s murder‚ Chetty said the police’s conduct had not gone beyond providing an opportunity for Panayiotou to commit an offence.

Panayiotou’s pre-meeting utterances to Siyoni indicated quite clearly that he recognised the cat was almost out of the bag and the decision to meet was to ensure that it remained inside.

Furthermore‚ Chetty said‚ investigating officer Captain Kanna Swanepoel had not needed prior authorisation from the Director of Public Prosecutions.

“It is clear the evidence procured [in the car] established Panayiotou ’s complicity in Jayde’s murder beyond a reasonable doubt.”

Chetty said a substantial portion of the trial had been devoted to establishing the origin of the R31‚000 found in Siyoni’s gym bag‚ but once the debris had been removed‚ it had become clear Panayiotou had retrieved it from his Infinity cocktail bar in Algoa Park the night of Jayde’s murder.

He then drove to Siyoni’s home and handed him the cash.

Chetty said Panayiotou and Siyoni had been aware only of Sizwezakhe Vumazonke’s identity as one of the hitmen. They did not know who he had solicited to help him.

Their identities emerged later through cellphone billing and plotting.

“To prove that they were in contact with Vumazonke prior to Jayde’s murder‚ expert witnesses were called.”

Chetty said much of the state’s case against them was based on circumstantial evidence.

“In our lives‚ acts and thoughts‚ we do not deal with certainty. We act on reasonability.”

He said Sibeko might not have been present on the day of the murder‚ but “when a conspiratorial agreement is made‚ the offence of conspiracy is complete”.

Chetty said the state had received severe criticism from the defence for the way in which it had handled the case. However‚ he felt they should be commended on a job well done.

Vumazonke died before the trial started‚ while Siyoni’s fate is still to be decided.

Christopher Panayiotou could go to prison for the rest of his life - a realisation that quickly sank in on Thursday when Judge Dayalin Chetty found ...
News
4 years ago

Thursday marked murder accused Christopher Panayiotou’s 31st birthday‚ but he will not have much cause to celebrate. In the Port Elizabeth High Court ...
News
4 years ago

Verdict to be delivered on Panayiotou’s birthday

Thursday marks Christopher Panayiotou’s 31st birthday‚ and whether or not he will be celebrating now lies in the hands of the court with Judge ...
News
4 years ago

Christopher Panayiotou’s lawyer said in his many years in law‚ this was the dirtiest case he had ever been involved in.
News
4 years ago