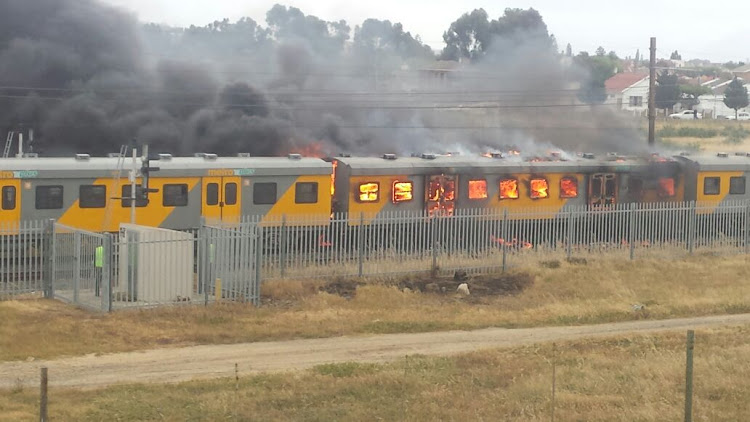 Thick black clouds of smoke billowed from three carriages of a passenger train that caught alight in Cape Town just after noon on Monday.

Initial reports by the city’s fire and rescue services said that no injuries were reported‚ but the blaze has spread to surrounding vegetation at the Century City railway station.

Fire and Rescue spokesperson Theo Layne said: “We have three carriages alight. No injuries have been reported‚ and the cause of the fire is undetermined at this stage. As a result of the train fire‚ the surrounding vegetation has now also caught alight.”

Metrorail spokesperson Riana Scott said that the Century City line had to be closed until the fire was brought under control.

“Metrorail confirmed that it lost more capacity‚ after a carriage caught fire today shortly after noon. A passenger trailer of train No. 2862 was reported on fire as the train was drawing into Century City Station. The two adjoining carriages have also been damaged. The fire affected optic fibre cables leading to the nearby train traffic control centre as well‚” Scott said.

“The fire brigade arrived on the scene within minutes and started dousing the flames immediately‚ after Transnet Freight Rail (TFR) switched off the overhead power. The railway line is currently closed until the flames have been doused and infrastructure assessed for any fire damage‚” Scott said.

“It is as yet too early to speculate on the cause of the fire. The extent‚ cause and cost of the damage will only be confirmed after TFR and Prasa’s loss adjusters have assessed the infrastructure and rolling stock‚” she added.

Metrorail has struggled to provide an efficient service in light of vandalism‚ theft and arson attacks on trains.

Scott revealed in October that 101 trains had been rendered non-operational since 2015. The cost to replace the trains stood at R312-million‚ she said. Every month‚ up to 70 trains were vandalised.

Prasa workshops were also being stripped of copper wiring.

Metrorail is in the process of erecting a wall along some of its most vulnerable tracks in Cape Town‚ at an estimated cost of R68-million.

The Railway Safety Regulator (RSR) was scheduled to officially launch its 2016/17 State of Safety Report on Monday. The report will deliberate on solutions to improve railway safety in the country.