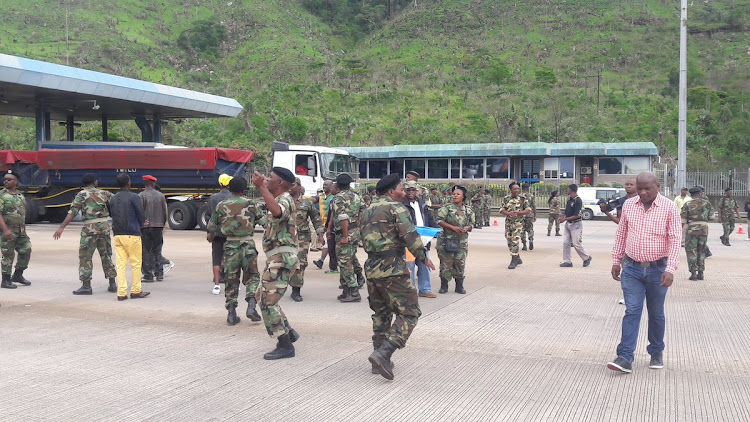 The N3 at the Mariannhill toll plaza in Pinetown near Durban was closed on Friday morning by members of the Umkhonto we Sizwe Military Veterans Association.

The veterans gathered in protest of what they called the “mass murder” of farm workers and the exploitative conditions under which they live.

Protesters clad in camouflage halted traffic in both directions‚ even pausing in the middle of the busy national freeway to burn an old South African flag.

This follows a national protest against the murder of farmers staged earlier this month‚ when combine harvesters‚ tractors and bakkies caused a traffic snarl along the N3 near Bergville and Estcourt in the KwaZulu-Natal midlands.

About 250 farmers from the areas around Bergville‚ Estcourt‚ Himeville‚ Colenso and Ladysmith‚ wearing shorts and black shirts‚ drove in a convoy along the R74 and onto the N3 toward Johannesburg as part of the #BlackMonday protest.

Geriatrics are having a new lease on life, it seems. Even grey beards, a mark of advanced age, have become de rigueur, fashionable. The Bellamy ...
Opinion & Analysis
4 years ago

What I saw and heard on Black Monday

I saw humility in the face of deep‚ deep grief. A wave of palpable forgiveness. People of all colours uniting in a spiritual war against violence. ...
Ideas
4 years ago

What happens now that the #BlackMonday protest marches are over and two-toned khaki resumes being the colour of choice for white farmers?
Opinion & Analysis
4 years ago

Black Monday in the killing fields

The murder of a small-scale KwaZulu-Natal vegetable farmer - hacked to death with a panga on Monday - has brought home the deadly reality for many ...
News
4 years ago