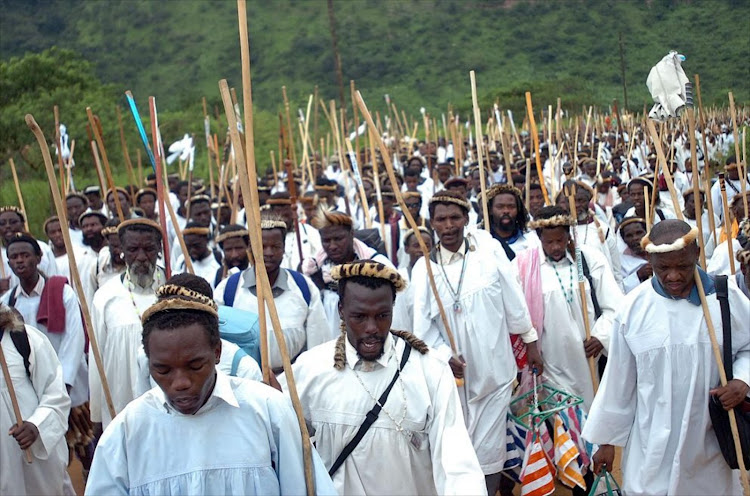 Early this year‚ the church had to reject rumours that Vela had died following claims on Facebook made by a woman believed to be a member of Mduduzi’s faction.
Image: Siyabonga Mosunkutu

The leader of a faction of the Nazareth Baptist Church‚ known as Shembe‚ which was embroiled in a five-year battle for control of the Durban church has died.

Vela Shembe‚ who was the leader of the smaller Thembezinhle faction‚ died on Thursday night after a long battle with cancer.

The church’s spokesman Chancy Sibisi told TimesLIVE on Friday that he had just heard the news about Vela’s death on radio. However‚ he said church leaders were still going to meet and more details would emerge later on Friday. He confirmed that Shembe had been sick but said it was not serious.

Vela was embroiled in a bitter feud with Mduduzi Shembe‚ the head of the bigger Ebuhleni faction‚ for control of one of Southern Africa’s most powerful churches.

In October last year‚ the Durban High Court ruled in Vela’s favour but Ebuhleni appealed the judgement. The two warring factions were back in court last month where judgement during the appeal was reserved.

The bitter and sometimes bloody war for control of the charismatic‚ five-million-strong church‚ founded in 1910 by Isaiah Shembe‚ has raged for decades. At the centre of the conflict are assets estimated to be worth more than R100-million.

Early this year‚ the church had to reject rumours that Vela had died following claims on Facebook made by a woman believed to be a member of Mduduzi’s faction.

There was cautious jubilation from the two warring Shembe church factions on Monday afternoon as they exited the courtroom after the Pietermaritzburg ...
News
4 years ago

Security has been stepped up at the Pietermaritzburg High Court as two factions of the Shembe church prepare to face off over the next three days.
News
4 years ago

His name means "thank you"‚ and one of the first things newly-installed Nquthu mayor Siyabonga Mabilabila Kunene did was thank his god‚ Shembe‚ for ...
Politics
5 years ago