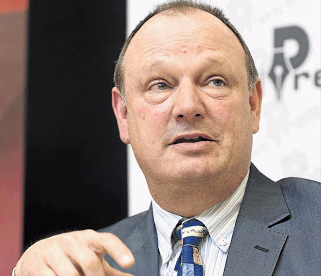 Wayne Duvenage of OUTA, called on MultiChoice to come clean and provide all the facts related to its transactions with ANN7.
Image: Sunday Times

Ongoing revelations contained in the Gupta leaks have revealed allegedly questionable payments by MultiChoice to ANN7 and the involvement of former communications minister Faith Muthambi.

“Hiding behind confidentiality clauses and telling half-truths is no longer an option in today’s world of citizen power‚ when the public can exercise its purchase strength to trigger the demise of organisations that profit from unacceptable and undue conduct‚” said Wayne Duvenage‚ CEO of the Organisation Undoing Tax Abuse (Outa) on Monday.

He called on MultiChoice to come clean and provide all the facts related to its transactions with ANN7.

Outa said in a statement‚ “It would appear that not only did the Guptas get what they wanted in the launch of their own news channel ANN7‚ which was rewarded with lucrative annual payments from MultiChoice to the tune of R140m‚ but MultiChoice appears to have also benefitted through transactions involving the Minister of Communications’ cancellation of the roll-out of a competitive encryption service for all TV platforms.”

MultiChoice has denied allegations of a corrupt relationship with Muthambi and said that the fee structure for its ANN7 contract was “in line with the costs of developing and running such a channel‚ and ANN7 is definitely not the highest-paid local news channel on the DStv platform.”

The Democratic Alliance (DA) called on MultiChoice to “publicly release the full contracts” it entered into with ANN7. MP Phumzile van Damme said in a statement on Sunday that should MultiChoice “fail to do so within 48 hours‚ the DA will request that the Independent Communications Authority of South Africa (Icasa) force it to do so”.

THE VALUATION OF NASPERS
Business Times
4 years ago

A former e.tv employee competing for a seat on the board of the communications regulator‚ the Independent Communications Authority of South Africa ...
News
4 years ago