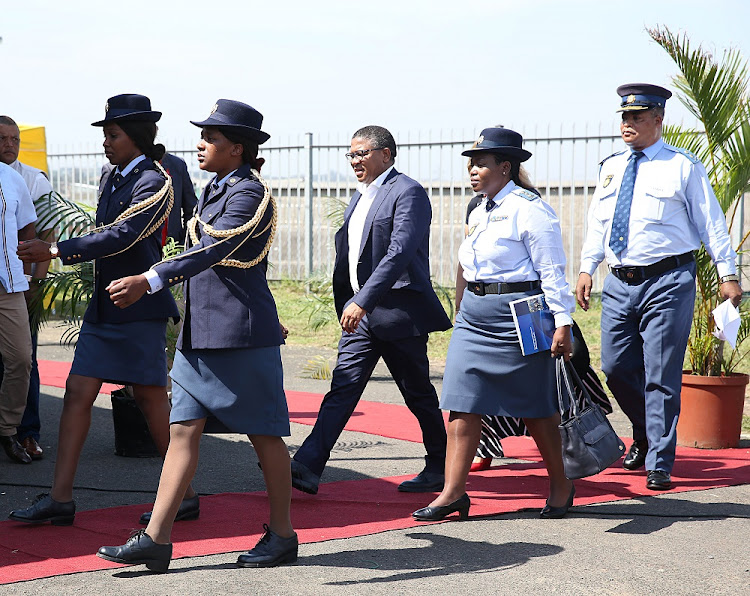 Minister of Police Fikile Mbalula during a launch of the new police station in Glebelands.
Image: THULI DLAMINI

A newly opened police station in Umlazi’s violence-riddled Glebelands Hostel will be a node to combat killings in the complex‚ said Police Minister Fikile Mbalula.

"Wanya Tsotsi! We will find you thugs!" he threatened.

The satellite police station‚ operating out of a municipal building‚ was officially opened on Friday.

“We were here in Glebelands. We came‚ we saw and now we are acting‚” he said‚ with reference to a visit to the area shortly after he made police minister.

“This station is a going to act as a multiplier to bring the services of fighting crime and interaction between our people and the police closer to where it matters most‚” he added.

“We want our officers to respond to dangerous criminals here. We want them to be tactical and we want them to know we are ready for them.”

The hostel‚ administered by the eThekwini Municipality‚ is widely considered to be a hotbed of violence and crime. Comprising squalid and poorly maintained blocks‚ the hostel is overcrowded and run down.

The police have been hard-pressed to combat the killings there‚ and have deployed officers from outside the area amid allegations of police collusion with criminals.

During the Moerane Commission of Inquiry‚ established this year to probe political killings in KwaZulu-Natal‚ witnesses described the hostel blocks as a haven for hitmen and criminals.

About 90 people have been killed since April 2014‚ either in the hostel precinct or elsewhere‚ in a series of attacks and counterattacks‚ according to activists.

Attacks by Glebelands hitmen are believed to include the shooting of ANC Youth League secretary-general and uMzimkhulu councillor Sindiso Magaqa. Magaqa was gunned down in July and later died in hospital.

A few years ago, a senior ANC leader in KwaZulu-Natal remarked of the province that it was not at peace - it just had an absence of war.
Opinion & Analysis
4 years ago

‘Troubled’ teen behind threats on Makhosi Khoza and other MPs

The culprit behind threats on outspoken ANC MP Makhosi Khoza‚ her daughter and other members of the National Assembly is a "troubled" teenage girl ...
Politics
4 years ago