Is this the worst-run municipality in the country? 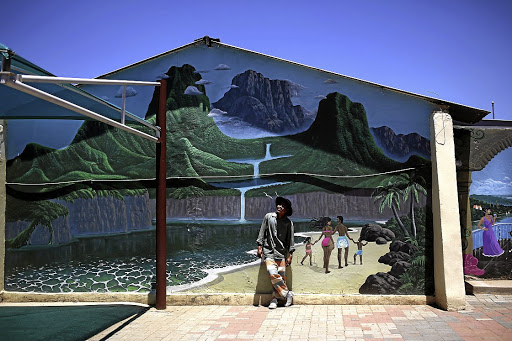 With debt of just over R3.5-billion owed to Eskom and the Sedibeng Water Board for basic services, Matjhabeng municipality in the Free State is, on paper, one of the worst-run municipalities in South Africa.

In the township of Thabong in the Free State‚ sewage runs down several roads. Crime has picked up because every single street lamp along its main road has been cut down and sold for scrap‚ leaving residents in darkness.

Thabong forms part of the Matjhabeng Local Municipality‚ which has gained a reputation for being one of the worst-run municipalities in the country. The reasons for Matjhabeng’s notoriety are visible everywhere in Thabong‚ which is outside Welkom. Children and adults alike navigate puddles of wastewater to leave their homes.

In some of the more affluent suburbs‚ water leaks spring as if out of nowhere – sometimes numbering around 400 on any given day.

TimesLIVE visited the city of Welkom and its neighbouring gold mining towns last week and found evidence of a dying local economy‚ with a municipality trying hard to keep the facade from crumbling. 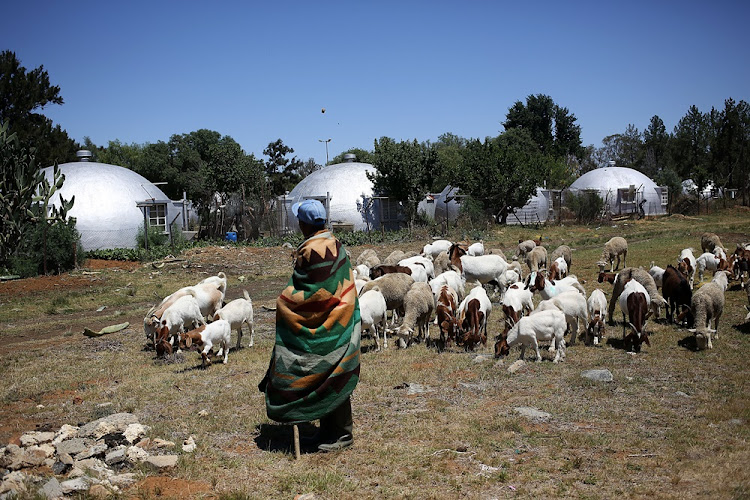 A man herds sheep in front of a mine's accomodation. Many mines in and around Welkom have closed, leaving many people without jobs.
Image: ALON SKUY

In Welkom central‚ it is not easy to spot the telltale signs of a city in decline‚ but on the outskirts abandoned buildings and stripped-out shops tell a different story. Smaller towns like Virginia and Odendaalsrus once flourished but are now being abandoned in a slow migration to greener pastures.

There are several spots around the Welkom area where dams of sewage have formed as the ageing infrastructure fails.

Since its inception in 2000‚ Matjhabeng has received qualified audit opinions consistently‚ confirming suspicions among locals of corruption running rampant.

For the past two years‚ however‚ the ship has changed direction. On Friday officials were informed of their second unqualified audit outcome in two years.

Government departments are not exempt – such as the Department of Public Works‚ which owes R47-million. Another R23-million is owed by other departments.

Sibanye-Stillwater confirmed on Wednesday that it had laid off more than 2,000 gold miners as it shuts its loss-making Cooke shafts where illegal ...
Business
3 years ago

Officials say that Matjhabeng executive mayor Nkosinjane Speelman has received death threats for his efforts to clamp down on illegal mining in the area.

Conservative estimates put the number of miners operating unlawfully in the abandoned shafts in and around Matjhabeng at several thousand. Near Virginia on the outskirts of Welkom‚ eight out of nine gold mines shut down in the late 1990s and early 2000s.

An estimated 100‚000 jobs were lost in the mining sector and support industries based in Welkom.

In September‚ a mine manager for two Harmony Gold shafts near Odendaalsrus‚ Simphiwe Kubheka‚ was shot and killed while driving home.

Harmony Gold would not comment on speculation that Kubheka had been campaigning to drive out illegal miners from several shafts‚ and had previously received death threats.

Speelman has written to the MEC for public safety in the Free State and Minister of Police Fikile Mbalula for assistance in dealing with the illegal mining syndicates operating in the area.

One municipal official‚ who spoke on condition of anonymity‚ claimed that there was evidence of the involvement of local police and affluent residents in illegal mining activity.

“We believe gold is smuggled out through the private airport‚ to Dubai and other places‚” the official said. 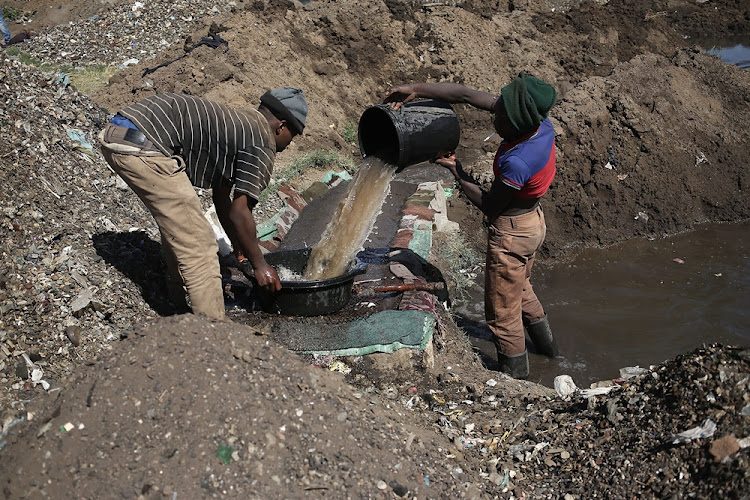 Men are seen washing the sand in a stretch of veld on the side of a road in Welkom.
Image: ALON SKUY

An illegal miner TimesLIVE spoke to refused to reveal where they sell their gold in Welkom‚ but claimed to make around R800 on a good day.

According to municipal spokesman Kgojane Matutle‚ illegal mining is costing the municipality millions every month. He explained that in several areas water pipes were tapped into for the zama zamas to wash their gold.

“It is a daily occurrence. We send someone to fix a pipe today‚ and tomorrow they break the pipe again‚” Matutle said.

Cable theft is also costing the municipality around R2-million every month.

Minister of Water Affairs Nomvula Mokonyane last week included Matjhabeng in a list of municipalities that have defaulted on their water bill.

TimesLIVE has established that Matjhabeng owes the Sedibeng Water Board more than R1.9-billion and Eskom R1.6-billion. In a reply to questions from DA councillor Piet Botha‚ municipal manager Thabiso Tsoaeli said around R70-million of the historical debt had been repaid.

Matjhabeng faces another massive problem – unemployment has resulted in fewer and fewer households being able to afford to pay utilities.

“Child-headed households are also a massive problem. HIV and AIDS has destroyed many families‚ and there is no way for the municipality to recover any funds from these homes. The money just does not exist‚” Matutle explained.

Illegal miners are swallowing unrefined gold and platinum in condoms as a new tactic to avoid arrest for smuggling that is costing the industry $1.5 ...
News
3 years ago

For the months of July to October‚ Matjhabeng billed its residents R379-million but collected only R180-million. At the same time‚ the municipality was billed R445-million by Sedibeng and Eskom.

Schalk van der Merwe‚ executive member of the Goldfields chamber of commerce and provincial chairman of the Small Business Institute‚ said that the entire Goldfields area was rapidly deteriorating‚ and an example of what other parts of the country could look like in five to 10 years.

“At this point in time the local economy is in decline. Every week you hear of a new business that is closing down. Even the big businesses are suffering‚ the little guys are suffering‚” he said.

“The towns are dying‚ Virginia and Odendaalsrus are dying. The only town that is not really that badly affected is Henneman‚ because it was never a mining town. It was always an agricultural centre.”

“But the rest of the Goldfields is going down and going down very quickly.”

Van der Merwe said that while the effect of the mine closures was undeniable‚ the lifespan of the mines was well communicated.

“From national and provincial government‚ and especially local government‚ there should have been plans in the pipeline to address this problem. Because you are sitting with a number of highly skilled people‚ but these skills have become redundant now. It was for government to facilitate a new economy to be introduced‚” he said.

“Organised business has done extensive work over the years on planning new initiatives to grow a new economy out of the old but from government’s side there was never really any buy-in.” 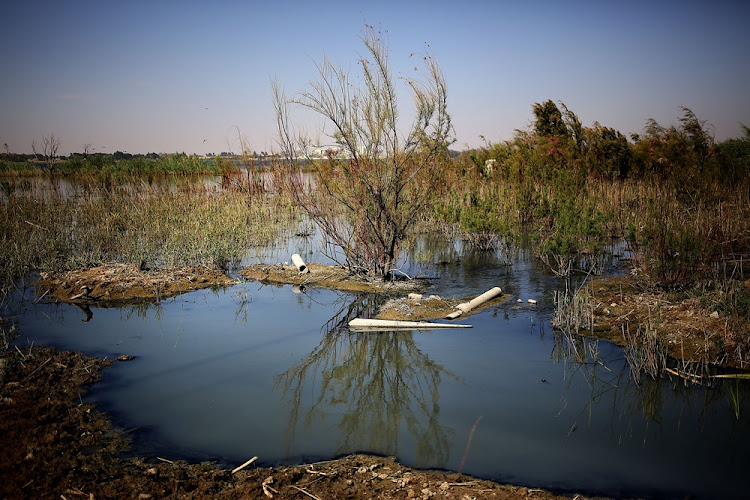 Claims have been made that sewage is being pumped into different bodies of water in Welkom.
Image: ALON SKUY

“For these guys to actually balance their books they must show that they have a huge amount of debt outstanding from the people that are supposed to buy from them. And we asked them for a list of businesses in the area who have outstanding debt‚ and we found some factories who have bills of R200-million. That is impossible‚ you can’t even use that amount of energy‚ never mind be in arrears to that amount‚” he said.

Last week the municipality announced to its residents through a front-page article in a local newspaper that no one needed to fear the water supply being cut off come December 8‚ as threatened by Mokonyane.

“The Matjhabeng municipality has been consistent in sticking to a payment schedule with Sedibeng and Eskom. However‚ the challenge lies with the defaulters who have undermined council’s 85% revenue target. Matjhabeng will not be affected by the cut-off threat‚” Matutle said.