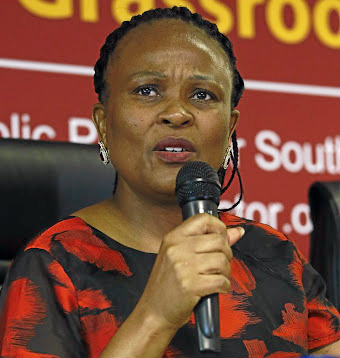 FINGERS IN THE TILL Public Protector Busisiwe Mkhwebane releases her report on an investigation into allegations of misappropriation of public funds by the Eastern Cape government and municipalities in preparing for Nelson Mandela's funeral
Image: Phill Magakoe

Public Protector Busisiwe Mkhwebane painted a picture of an unprepared Eastern Cape scrambling to arrange the funeral of former president Nelson Mandela, thereby opening the floodgates for opportunists to cash in on weaknesses in the system.

Releasing her report on an investigation into allegations of the misappropriation of public funds for the funeral, Mkhwebane said there was a lack of properly co-ordinated planning for state funerals.

The funeral of Mandela, who died four years ago on Tuesday, was regarded as an emergency, resulting in massive unauthorised, irregular and wasteful expenditure.

"This weakness was explored and capitalised upon by some service providers that took advantage of the situation and inflated prices. Some submitted invoices and were paid for goods and services, the delivery of which was not or could not be verified," said Mkhwebane.

She pointed a finger at senior Eastern Cape officials, including director-general Marion Mbina-Mthembu.

Also listed in her report are senior Buffalo City councillors Sindiswa Gomba and Luleka Simon-Ndzele, Buffalo City chief financial officer Vincent Pillay and former mayor Zukiswa Ncitha. They are singled out for their roles in the misuse of R5-million allocated for the Mandela funeral.

Mkhwebane wants President Jacob Zuma to order the Special Investigating Unit to investigate all those implicated and charge those against whom evidence exists so that taxpayers' money can be recovered.

In another case, Mkhwebane pointed at a company, Reagola Print and Mail, for having "unilaterally changed the order and only supplied T-shirts, the number of which could not be established with certainty.

"[Reagola] even went so far as to sign for delivery and to submit another invoice for the outstanding payment of more than R1,9-million after the funeral, without disclosing that it had changed the order and delivered T-shirts after the funeral at taxi ranks and other places.

"The evidence indicates that the conduct of Reagola Print and Mail may constitute a criminal offence that should be referred to the National Prosecuting Authority," it stated.

Troubles at the East Cape Development Corporation started after Premier Phumulo Masualle's cabinet made a controversial decision in October 2013 to channel more than R330-million into the corporation, making the entity solely responsible for funding all preparations for Mandela's funeral in December 2013.

Mkhwebane said Mbina-Mthembu "misdirected the Eastern Cape provincial [executive committee] in this regard. Her proposal was irrational and unlawful."

She also blames former acting chief financial officer of East Cape Development Corporation, Sandile Sentwa, saying he should have been aware that the payments were made in violation of Treasury regulations.

"Yet there is no indication that he raised alarm or his concern with the board, to whom he was accountable ..."

Asked for comment, Sentwa said: "The ECDC did not procure anything but was paymaster on Treasury instruction. A recommendation to put controls in procurement does not therefore appear to be right."

The Times' sister newspaper, The Daily Dispatch, reported several times that money earmarked for service delivery was used to buy T-shirts and food for mourners in municipalities such as Buffalo City Metro, King Sabatu Dalindyebo Municipality and OR Tambo district. This led to the arrest of Ncitha, Gomba, Simon-Ndzele, suspended secretary of the ANC's Dr WB Rubusana region Pumlani Mkolo and local businesspeople including Dean Fanoe and Viwe Vazi. The case against them for their alleged involvement in the misuse of almost R6-million is ongoing.

"They acted dishonestly, without good faith and in a manner that compromised the integrity of the [Buffalo City municipality]."

About 3,000 marshals deployed for the funeral were treated to almost R1-million worth of meals from fast-food outlets Kentucky Fried Chicken and McDonald's.

King Sabata Dalindyebo municipality hired 255 catering companies to provide breakfasts at R35 per person and lunch at R70 each. The companies were each appointed to cater for 100 people.

Almost R500,000 was spent on refuse bins that are now gathering dust.

Gomba, Simon-Ndzele and Mbina-Mthembu could not be reached for comment on Monday.

Sonwabo Mbananga said the provincial government would be able to comment once it had a copy of the report. - Additional reporting by Bongo Jacob, DispatchLIVE