Metrorail’s own stats show how bad its service is 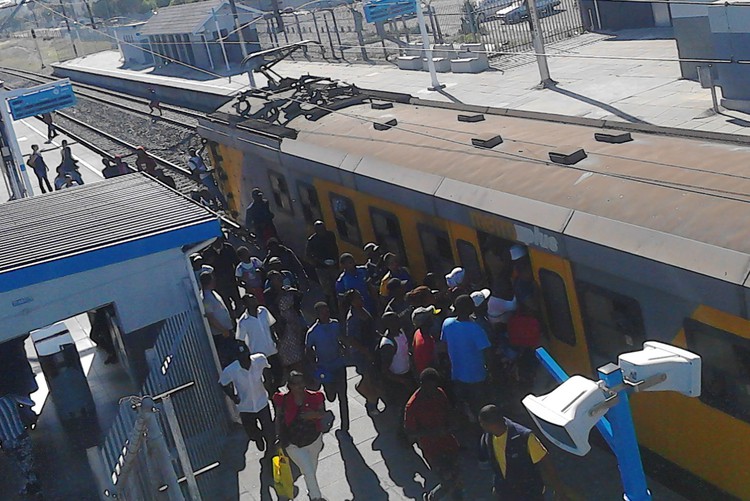 This train at Parow Station on Thursday was so full, that many people on the platform could not board it.
Image: Tariro Washinyira

Long-suffering Metrorail commuters were stranded again on Thursday at Parow station as trains in both directions were delayed.

Metrorail’s own statistics show that very few Cape Town trains actually run on time‚ and at least 40% of scheduled trains don’t run at all.

In its MyLine newspaper distributed on stations‚ Metrorail reported that in the week from 30 November to 6 December only 14% of trains on the central line were on time in the mornings and only one train in three in the evenings. The central line runs from Cape Town to Kapteinsklip‚ Khayelitsha‚ Chris Hani and Sarepta.

It was during this week that councillor Brett Herron wrote in GroundUp about his experience taking a train from Khayelitsha. He wrote: “For the early morning peak‚ trains are scheduled to depart from the Nolungile station at 5:19am‚ 5:34am‚ 5:41am‚ 5:49am‚ 5:56am and 6:04am. They are scheduled to arrive at the Cape Town station 50 to 60 minutes later. Not a single train‚ however‚ arrived before 6am.”

In that week‚ 57% of trains were cancelled‚ both in the mornings and evening.

Cape Town man electrocuted while travelling on roof of train

A commuter was electrocuted on a Metrorail train at Nyanga station on Thursday morning.
News
4 years ago

Metrorail commuters on the North line fared little better: “only” 18% of trains were cancelled. Less than half of the trains were on time in the mornings or in the evenings. The North line runs from Cape Town to Monte Vista‚ Bellville‚ Wellington‚ Stellenbosch and Strand.

On the North line on Thursday at about 7:50am‚ two trains heading for Cape Town stopped‚ one behind the other‚ between Parow and Tygerberg stations. A train heading in the opposite direction also stopped when it reached the same spot.

Commuters walked along the railway line all the way to Parow taxi rank. When a Cape Town train did come‚ it was full and some people could not board.

One commuter who works in Somerset West said he was worried that “Metrorail incompetence” might cost him his job.

He said when his usual train had not come to Parow station he had taken a taxi to Bellville and a train - which had been delayed for 45 minutes - from Bellville station to Somerset West. He said the train had stopped again for about 20 minutes close to Sarepta station.

A domestic worker who works in Camps Bay said she had been forced to take a taxi. In the past two years her relationship with her employer had soured because she was always late for work because of train problems‚ she said.

Thick black clouds of smoke billowed from three carriages of a passenger train that caught alight in Cape Town just after noon on Monday.
News
4 years ago

- Elsies River required that some trains had to be re-routed via Monte Vista while others could only proceed with manual authorisation resulting in 60+minutes longer travelling time.

• This article was originally published by GroundUp