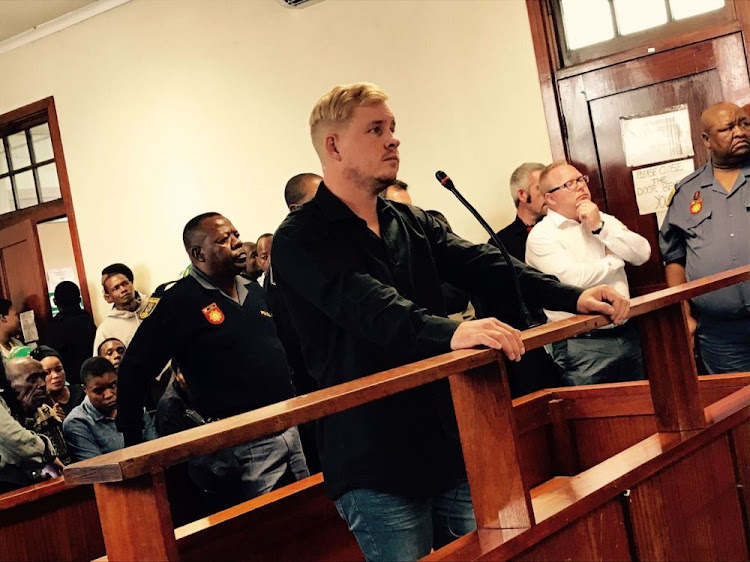 Matthew Benson appeared at the Brits Magistrate's Court on Friday for murder and attempted murder linked to the disappearance of Tebogo Ndlovu.
Image: BAFANA NZIMANDE

The murder and attempted murder case against Matthew Benson is heading to the Pretoria High Court.

On Thursday‚ the case was postponed to January 26 in order to obtain a High Court date following an application by the prosecution.

Benson's charges are linked to the mysterious disappearance of Tebogo Ndlovu‚ who was last seen on August 2‚ when he and two accomplices were shot at while stealing oranges at a Mooinooi farm owned by Benson's parents in the North West province.

Benson will remain in custody until his next court appearance. The 24-year-old was arrested on September 16 and was denied bail by the Brits Magistrate's Court on September 29. He has pleaded not guilty to the charges brought against him.

During his bail application‚ Benson told the court that Ndlovu is still alive and he has a witness who can back his claim. Magistrate Jethro Mosime rubbished rumours that Ndlovu could be in hiding.

Benson's supporters have hired a private investigator to sniff out Ndlovu and have set up a R50‚000 reward.

North West police are also offering up to R100‚000 for any information that might lead to Ndlovu's whereabouts.

North West police have received several calls from people claiming they have information that might solve the mystery around Tebogo Ndlovu's ...
News
3 years ago

North West police are offering a reward of R100‚000 for information that might lead to the whereabouts of Tebogo Ndlovu – even though they believe he ...
News
3 years ago