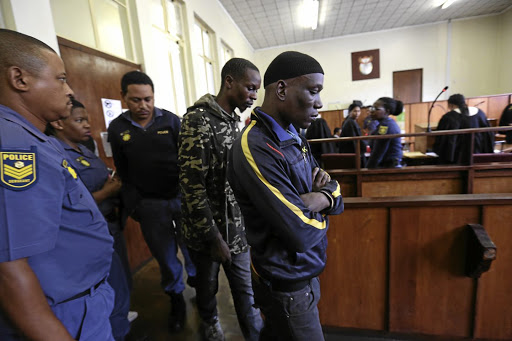 Two men accused of eating human flesh in the vexing "cannibals" case that has gripped KwaZulu-Natal were refused bail during a brief appearance at the Estcourt Magistrate's Court on Thursday.

Lungisani Magubane and Khayelihle Lamula shuffled out of the dock after their bid for bail was refused, covering their faces from media inside the courtroom.

They, along with co-accused Nino Mbatha and Sithembiso Sithole, will remain behind bars before their case is heard again next year.

Mbatha and Sithole had originally indicated they would also apply for bail, but later abandoned that application.

They face charges of murder, attempted murder and conspiracy to commit murder.

The grisly story broke in August when Mbatha, a traditional healer, walked into the Estcourt police station to report that he was in possession of body parts and was tired of being forced to eat human flesh. The incident opened a can of worms as Mbatha led police to his home in Estcourt, where more body parts were recovered. The case was soon taken over by the SAPS Occult Crime Unit.

Seven men were arrested with charges withdrawn against three of the men due to insufficient evidence.

Alson Mabaso, the uncle of a suspected victim of the gang, Zanele Hlatshwayo, expressed his contentment that bail had been refused.

"I am so happy about what happened today because I would be very sad if these people had been released on bail. I am very glad that the court did a good job by not releasing them on bail. We are very happy," he said.

The hearing of the matter has been delayed by forensic evidence, which would see a range of different human body parts identified and then linked to disappearances using DNA.

The suspects will appear in court again on January 25.