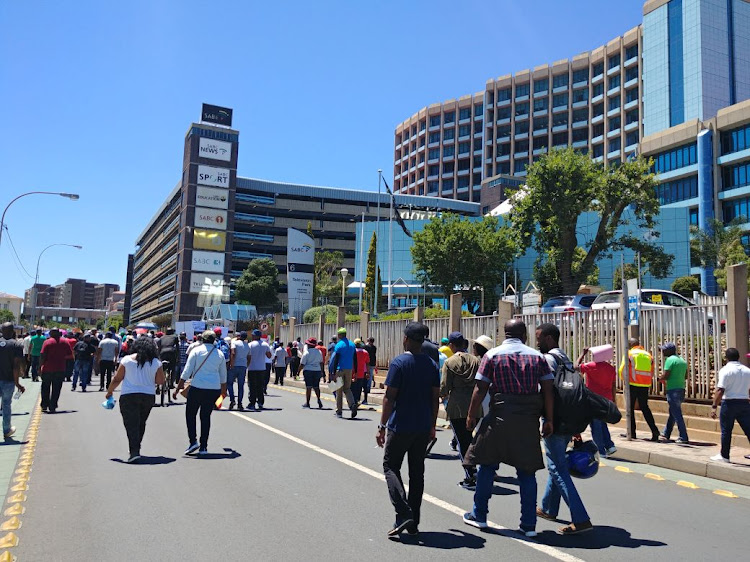 SABC staff went on strike on Thursday after management and staff could not reach an agreement over pay increases.
Image: Supplied

SABC management have offered to enter into mediation on Friday to break a wage deadlock and prevent further disruptions to programming.

The proposal comes a day before the ANC's elective conference‚ which could be hampered by the absence of dozens of SABC staff.

The strike was initiated by union Bemawu and the Cosatu-aligned Communication Workers' Union.

An urgent SABC board meeting was called on Thursday to resolve the standoff.

Management later told staff that they would return to the negotiating table‚ with the possibility of a revised offer.

The company had offered a 4.5% raise‚ while workers demanded 10%. It condemned any acts of intimidation against striking employees.

Ukhozi FM‚ one of South Africa’s biggest radio stations‚ has since Thursday morning not broadcast any news bulletins due to a strike at the SABC.
News
4 years ago

"The SABC concurs with organised labour that our human capital is indeed an integral part of our business and crucial to the success of our institution‚ accordingly we condemn any acts of alleged victimisation both of striking and non-striking employees and we call upon the unions to assist in ensuring that there is no victimisation and/or intimidation of any sort‚" said Sello Xama‚ acting general manager of employee relations.

"We hereby thus request to revert to you on your demands with a possibly revised offer as soon as a mediation meeting is scheduled by the CCMA‚ preferably tomorrow 15 December 2017. In this regard we will liaise with the CCMA‚" Xama said in a memo to staff.

Cosatu urged all its affiliates to support the strike.

"The Congress of South African Trade Unions fully supports the striking SABC workers as led by our affiliate CWU and other unions‚" Cosatu said in a statement on Thursday.

"We are calling on the public broadcaster to respond to the legitimate and reasonable demands of the workers because the demand of a 10% salary increase is in line with the escalating price of basic necessities in the country. Food‚ electricity and fuel costs have gone up over the last couple of months and the workers are right to ask for salary increments that will keep pace with the cost of living."

The SABC said that it regrets a decision by workers to embark on strike action on Thursday but that the stoppage will not affect programming.
News
4 years ago

Right2Know said it was "dismayed" by reports that the SABC was applying the no work‚ no pay principle.

"It must be noted that SABC workers have borne the brunt of the SABC's crises over the years. The SABC was able to procure millions to pay interim board members‚ despite the financial crunch‚ yet claims they cannot afford a ten per cent increment for workers‚" it said in a statement.

"This raises the question of prioritisation. Remedial action by the SABC board would go a long way in signalling the advent of stability and sound management at the public broadcaster."

The SABC has said that it cannot afford increases as the public broadcaster battles serious financial problems‚ but workers have been angered by a R3.9-million payout given to members of the interim SABC board.