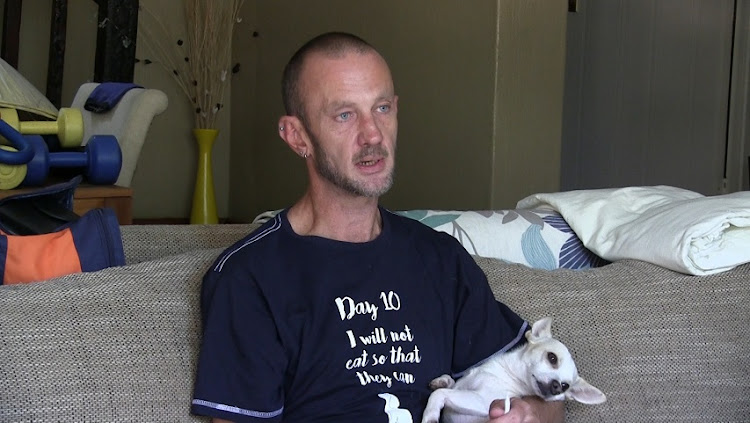 That is not all. To demonstrate his passion for animal rights‚ Le Roux has gone as far as getting himself marked‚ live on social media‚ with the number 269‚ using a red-hot iron rod on his back to experience first-hand the pain felt by livestock during the branding process.

The significance of the number 269 is that it was the number of a calf that was rescued from slaughter at an Israeli dairy farm. The calf is still alive today‚ thanks to a campaign by animal rights activists all over the world.

"The calf has a number 269 and the number has since become a symbol of animal rights worldwide … I cannot speak with authority on something that I have not experienced myself. I (had) no experience how it feels to be branded‚ so the next time I educate somebody about getting branded‚ I can tell them it is this painful‚" he said.

He is also in the process of forming a political party that will campaign strictly on animal rights‚ saying everybody had their rights entrenched post-1994 but animals' rights were never taken into consideration.

"It will be the first animal rights political party … it will be the only one in Africa that will focus on the rights of animals‚" he said.

Pale‚ visibly weak and hungry as he welcomed the TimesLIVE team to a friend's house in Equestria‚ Pretoria East‚ the 45-year-old said that when he started his hunger strike on December 4‚ his target was to raise R20‚000 in 20 days.

However‚ there has been such a positive response that he has now raised the bar to R60‚000 after he reached double his target within days.

He chose to go on a hunger strike to feel what hungry animals experienced. It has not been an easy journey though. Le Roux‚ a recovering drug and alcohol addict who has suffered from bipolar disorder for over two decades‚ said the fourteenth and fifteenth days were the most difficult.

"It was so horrible that I thought I was going to die but I remained resolute and now I can go past restaurants without feeling any urge to eat‚" he said.

Le Roux said‚ though he had received massive support‚ some people had asked why he was putting his life in danger to prove a point.

"People actually comment on how you can cause harm to your body to try to prove a point that has already been proven; that there are millions of animals in the world that go hungry‚" he said.

Le Roux said that when he breaks his long fast on Saturday‚ he would announce the details of how the funds would be distributed to animal shelters in Pretoria‚ Johannesburg and KwaZulu-Natal.

He has decided to become a vegan.

"When I eat again‚ it will not be meat products‚" he said.

Herman H le Roux, an animal rights activist from Pretoria, has gone to extreme lengths to assist animals without food and shelter. Le Roux has not had food in over 20 days in order to raise funds ...