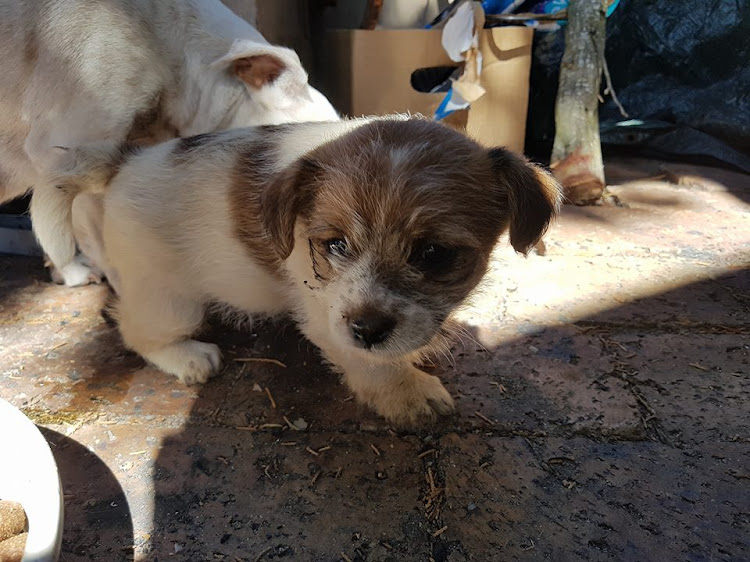 The six week old puppy after it was rescued from a water well. The puppy fell down 15 meters and eight hours later the dog was safe and sound.
Image: Hugh-Daniel Grobler

Sometimes not everyone lives happily ever after but‚ as Gaansbaai residents learned‚ miracles do happen.

On Tuesday Adri Franken awoke to the distressing cries of two puppies and their mother. The six-week-old Jack Russell puppies had fallen down a 15-metre pipe leading to a water well. The 60-year-old had been house-sitting for friends.

Franken said because she is on crutches she could not rescue the puppies on her own. She took to the local Gansbaai Facebook page to ask for help and within minutes‚ people were arriving at the house to help rescue the dogs.

“I was sleeping when all of a sudden I was awoken by the cries of the puppies. I was so shocked when I found them down the pipe‚” said Franken.

Franken said she cannot understand how the puppies ended up down the pipe‚ because they sleep nowhere near it. She suspects that their mother may have carried them there.

But it is the generosity of community that has left her dumbfounded.

“I have never seen that page so busy. People were giving all sorts of advice. An hour later‚ 20 people were at the house trying to rescue the puppies‚” said Franken.

The animal welfare society‚ police and the fire brigade were among the helpers.

“That is not all‚ people on Facebook were glued to the page and I had to keep them updated. They kept on asking whether the puppies were saved‚” said Franken.

“Two women came to house and gave moral support to the men as they were trying to rescue the dog. They served cooldrink to the men also‚” said Franken.

After an eight-hour ordeal‚ however‚ the rescuers were able to save only one of the puppies.

“When the puppy came out it was a big happy moment. Everyone was shouting with excitement - one lady even cried. They tried looking for the other puppy but could not find him‚” said Franken.

The animal society came by to check on the puppy and‚ said Franken‚ he was given a clean bill of health.