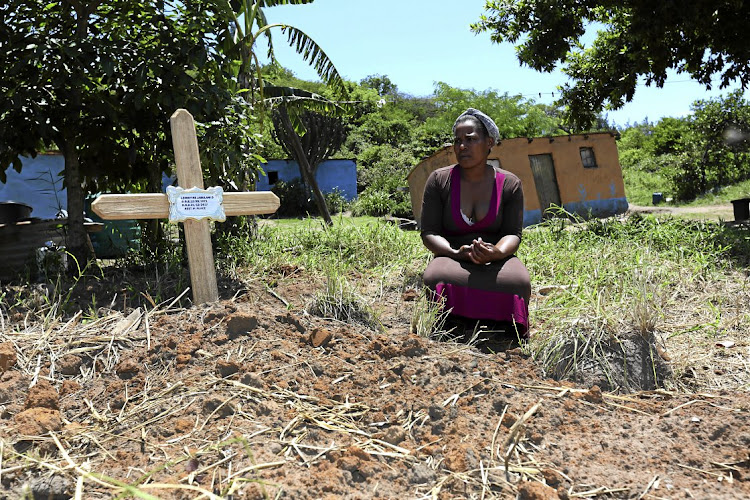 Zandile Lembethe at the grave of her brother Jabulani Lembethe. Farmer Philip Solomon is expected to apply for bail in the New Hanover Magistrate’s Court over the murder. File photo.
Image: Jackie Clausen

Farmer Philip Solomon is expected to apply for bail in the New Hanover Magistrate’s Court on Tuesday after being held in custody since his arrest on New Year’s Eve.

The 65-year-old was charged with the murder of Mothiwa Ngubane and the attempted murder of Mondli Lembethe during a funeral service being held at his farm in Cramond in KwaZulu-Natal.

Longstanding tensions between Solomon and the Lembethe family culminated in the bloody shooting.

The murder has exposed racial fault-lines in the agrarian community‚ drawing back the veil on allegations of historical prejudice and violence.

Two days after Solomon’s first appearance in court‚ his life-partner was attacked by a group of men on their property. Marie Bucher‚ 60‚ sustained serious head trauma when she was beaten in the attack.

At his court appearance‚ protesters chanted “kill the boer … kill the farmer.”

Tensions were high outside the New Hanover Magistrate’s Court in KwaZulu-Natal on Tuesday 9 Jan 2018 as protestors gathered for the bail hearing of Philip Solomon, who allegedly shot and killed a ...

A cluster of mud homes and a fresh grave on a farm in the KwaZulu-Natal Midlands are at the centre of land conflict spanning decades between a local ...
News
4 years ago

The partner of a KwaZulu-Natal Midlands farmer accused of murder was attacked on their Cramond property on Thursday afternoon.
News
4 years ago

A bitter feud over land allegedly lies at the heart of the brutal slaying of Mothiwa Ngubane‚ gunned down on the farm in Cramond‚ KwaZulu-Natal‚ on ...
News
4 years ago