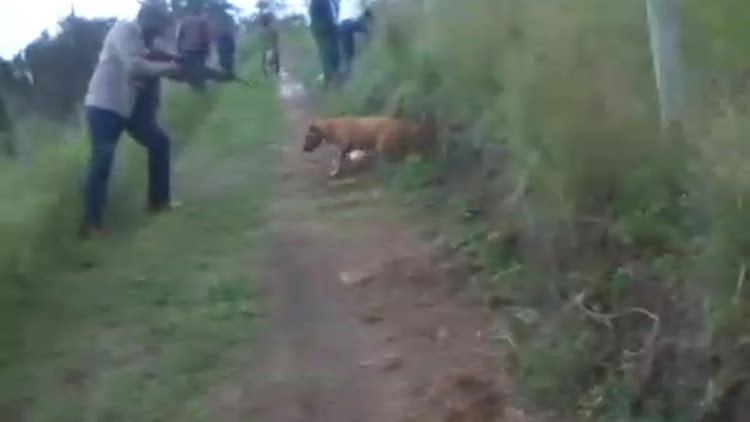 A video of several shots being fired at a dog writhing in pain in front of children set off an animal cruelty investigation.
Image: Supplied

Criminal charges have been laid against a deputy mayor and his bodyguards for the gruesome shooting – captured on video – of a dog tied to a pole in rural KwaZulu-Natal.

Mthonjaneni deputy mayor Philani Ntombela was filmed encouraging a man to shoot the wailing dog‚ several times‚ with a rifle in front of children near the town of Melmoth.

Ntombela defended the shooting in a previous interview with TimesLIVE. "That dog was terrorising everyone. It was eating people's livestock and poultry. It also ate my pregnant goats‚” he said at the time‚ adding that the dog owner had given consent for the animal to be shot.

But an investigation conducted by the National Council of SPCAs (NSPCA) revealed on Wednesday that the incident was worse than initially reported.

Five days after the video surfaced on social media‚ an SPCA inspector from Eshowe visited the area and found a dog - still alive with multiple gunshot wounds.

“On closer analysis of the video that originally depicted a dog that is tied to a pole being repeatedly shot‚ it came to light that four dogs were in fact shot‚” the NSPCA said in a statement.

“One dog was shot multiple times‚ another dog escaped wounded and two puppies were shot. One of the puppies was in the hands of a nine-year-old old boy and the shooter took the shot whilst still in the hands of the young boy.”

A witness told the inspector that there was no proof that the dogs that were shot had in fact attacked roaming livestock.

“We are absolutely overcome with devastation for these animals who have been failed by humans. The sheer disregard to their sentience is disturbing and to walk away showing absolutely no shame is unforgivable‚ in the midst of children‚ while one of the animals is in the hands of a child – it is inconceivable to think that this was the act of leadership‚” said NSPCA spokesperson Meg Wilson.

An NSPCA inspector travelled to Melmoth‚ accompanied by an armed guard‚ to open a case. The NSPCA have laid charges against the deputy mayor‚ his bodyguards and the owner of the dogs in terms of the Animals Protection Act.

Police are conducting a separate investigation related to the use of firearms to shoot the dogs.

A deputy mayor has defended the gruesome way a dog – writhing and crying in agony - was shot several times by a man with a rifle in front of children ...
News
3 years ago