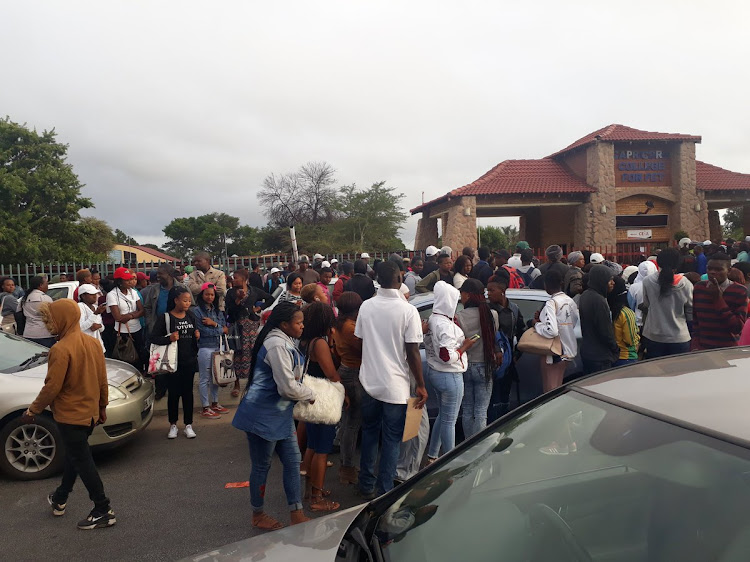 The Capricorn Technical Vocational Education and Training (TVET) College in Limpopo has suspended registration for new students following a stampede at its Polokwane campus‚ which led to injuries to five prospective students.

Capricorn TVET College public relations officer Tumelo Morobe said the stampede happened early on Thursday morning as about 1‚500 students gathered outside the gates of its campus and started pushing one another.

This happened before the institution could open its gates.

Five prospective students were injured in the stampede. Two entrance gates to the campus were damaged.

“They were taken to the Polokwane Provincial Hospital for treatment‚” Morobe said.

The Polokwane campus has a space for 1‚200 students. The institution has three other campuses.

Morobe said the campus management decided to suspend the registration for new students at the Polokwane campus.

The EFF Students Command‚ which is leading a campaign of "walk-ins" at tertiary institutions during the registration period‚ despite pleas from authorities for students to use online registration portals‚ said in a statement on Thursday that it intended to open a case with the police to charge the college with mismanagement.

Wishing those hurt a speedy recovery‚ the EFFSC said its representatives "will visit them in hospital to make sure they fully heal and are registered".

The EFF Student Command‚ in a statement issued by national spokesperson Mangaliso Sambo‚ alleged: "The casualties were suffered by desperate learners who were left unattended and locked out of the campus by Capricorn management for two nights until they decided to open for themselves".

"Thousands of academically deserving students were refused entry by armed security guards‚ provoking and locking them out without granting them a chance to apply even after students and EFFSC had reached agreements with the TVET sector.

"Failure of the TVET to co-operate on time is the cause of this incident. The EFFSC branch leadership was there ensuring safety and security for everone until hungry‚ exhausted‚ hopeless‚ education-less students could not take it anymore sleeping at the gates every night unattended and constantly forging a war with hunger and mosquitoes.

"It is after the students decided to open the gate and access campus this morning‚ harshly assaulted by college security‚ that the Capricorn management then came to its senses and decided to offer Peter Mokaba stadium as an open space to allow smooth registration‚" Sambo alleged.

"The college will be charged for mismanagement and we call on the TVET sector CEO to quickly implement as per our agreement to allow walk ins before hell breaks loose and innocent students suffer‚" the EFFSC spokesman said.