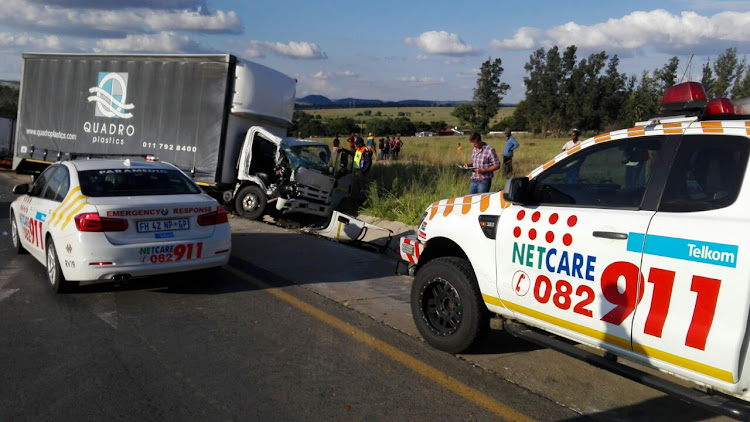 A truck driver is in a critical condition after a stone-throwing incident led to his truck crashing into another vehicle near Lanseria airport.
Image: Netcare 911

The truck driver who bumped into another truck while fleeing from a stone-throwing mob is devastated over injuring the other driver.

The incident took place near Lanseria north west of Johannesburg on Wednesday.

Mbongeni Zwane said he regretted injuring the other truck driver who is in a critical condition in hospital.

"I am hurt. It's devastating that I injured a man who probably has a family to take care of. It's not nice. I wish things did not happen the way they did‚" said Zwane.

Zwane said he wished he could have had a chance to speak to the injured driver but was unable to as officials needed to take statements. "There was no time to talk or get his numbers. It all happened so fast‚" said Zwane.

A truck driver is in a critical condition after a stone-throwing incident led to his truck crashing into another vehicle near Lanseria airport in ...
News
4 years ago

The driver says that it was business as usual when he was driving back from making a delivery to a firm when a group of people attacked him.

"I had just joined the gravel road to the firm from the tar road when I saw a group of people standing up. When I drove closer they started throwing stones at the truck and I had to quickly reverse. While I was doing that they ran after the truck and I was not focused‚ so I immediately drove into the tar road and‚ unfortunately‚ I bumped into the other truck‚" he said.

Zwane believes that the attack was targeted at anyone driving into his workplace as some of the workers have been on strike since December 14.