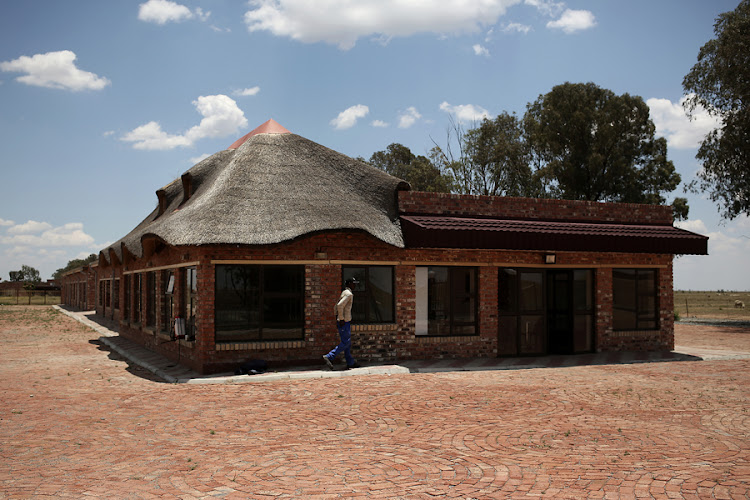 An employee is seen on the premises of a farm. Ten people including those from Lesotho and South Africa were found and rescued from the farm, near Welkom, in The Free State. Six suspects were arrested for alleged human trafficking.
Image: ALON SKUY

A whistleblower's call for help to his wife in Lesotho has exposed the operations of a sophisticated international slave trade syndicate.

For years South African police have been investigating the alleged operations of the organisation‚ run in the Free State. But authorities say the suspected mastermind‚ a prominent businessman known as the "General"‚ who has been arrested before on multiple charges‚ including kidnapping‚ has always managed to stay one step ahead of the law.

On Wednesday organised crime unit detectives from the Hawks raided homes‚ lodges‚ farms‚ taverns‚ a taxi rank and a panel beater’s shop‚ in the mining town of Welkom‚ arresting six people and rescuing 10 women and men. The 10 had allegedly been trafficked from across the country and southern Africa.

Among those arrested were two recruiters from Lesotho and several of the businessman's relatives. It was the breakthrough police have wanted for nearly eight months.

A Lesotho national‚ driven by the horror of guarding dozens of sex slaves and the knowledge that his wife and sisters were to suffer the same fate‚ ...
News
3 years ago

The call for help sparked a three-day operation‚ involving the South African embassy in Lesotho and police in South Africa and the Mountain Kingdom.

Nyakane said they began probing the alleged syndicate in May after getting information that numerous farms were being used to keep people trafficked by the syndicate.

"Until now‚ we just couldn't get the break into the syndicate that we needed. We knew about it but it was difficult. People simply didn't want to speak.

"When we raided the farms and lodges‚ we found people who had been brought to South Africa‚ where they were told they would work as cleaners and receptionists. Instead they were pushed into prostitution."

He said the operation was not over.

"Since the arrests we have obtained detailed information‚ which will lead to more arrests and raids across the province.

"We believe that there are many farms that are being used to not only house these women‚ but also as brothels which people‚ many of them farmers and other rich and well-to-do people‚ come to visit."

He said they wanted the businessman‚ who was allegedly on the run‚ to come forward and assist them with their investigation.

"We have arrested him before. Unfortunately the case did not proceed. We believe that he can be very helpful to us in our investigation. He will have important information which we can use."

Nyakane said the Hawks were concerned about the level of human trafficking in the province.

David* arrived in South Africa last week‚ with the promise of work as a shop assistant in the Free State mining town of Welkom. Instead‚ with the threat of violence and death hanging over him‚

"The Free State is a very rural province. These syndicates use farms and lodges outside of cities and towns because of their isolation."

The businessman demanded to know what TimesLIVE was doing on his properties when approached for comment. He described what happened to him as a witch-hunt.

"The farm that you are at‚ that is not run by me. It's a family business and my family choose who to hire‚" he said.

"I'm told these problems started when two boys from Lesotho complained to the South African embassy in Lesotho that my uncle was misusing them. They were on the farm to take care of the cows‚ but didn't want to."

The businessman‚ who claimed he was in Durban‚ said he was shocked that people had been arrested at his businesses.

Asked about allegations that he was the mastermind behind an apparent international human trafficking operation‚ he said it was all lies.

"The police are targeting me. They have been targeting me since 2010‚ when a 17-year-old girl from Kimberley was found at one of my outlets.

Six suspects have been arrested for alleged human trafficking in the Free State‚ the Hawks said on Friday.
News
3 years ago

His wife‚ approached outside their lodge in Welkom just 2km from the Hawks offices‚ said she was not allowed to comment.

Joyce Kgoabane‚ whose relative was arrested in a raid on one of the farms‚ said she did not know why he was arrested.

"I'm worried about him. I want to speak to him but I can't. The police will not tell me anything.

The businessman's brother denied that their farms were used to traffic people.

"I was told people were arrested on our farm‚ but I don't know why. There are no girls here. You can see the rooms. They are all empty."

He said that the people arrested on the farm were good people and family men.