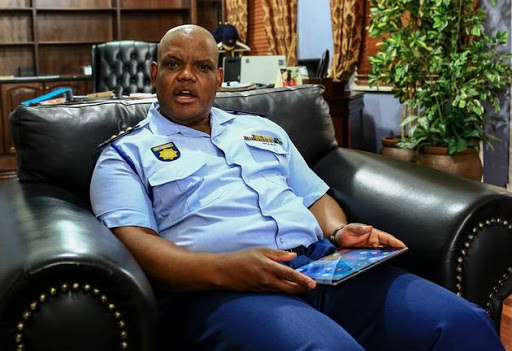 The policeman‚ dubbed "Captain KGB”‚ was arrested by Independent Police Investigative Directorate [IPID] officers on Tuesday outside the Correctional Services Department headquarters in Pretoria. He was arrested as he met his parole officer.

Justice department documents seen by TimesLIVE show that the policeman was released on parole from Groenpunt Maximum security prison in November 2015‚ where he had been serving a 10-year sentence. for an armed robbery committed in Pretoria’s Mamelodi township in 1994.

Convicted in 1996‚ he failed to surrender to prison officials when he lost his appeal‚ instead joining the police’s crime intelligence unit for the first time.

The former head of the police crime intelligence service in the Free State was arrested and appeared in court on Thursday for allegedly protecting ...
News
4 years ago

He began his 10-year sentence after he was arrested in February 2013 for a cash-in-transit heist in Sasolburg. Although found not guilty‚ according to sources with knowledge of the case‚ he was imprisoned for the 1994 armed robbery. On his release in 2015‚ he rejoined the police in his former post in the covert crime intelligence section.

According to the SA Police Union [SAPU] president Mpho Kwinika‚ the policeman's reappointment could only have been sanctioned by the national police commissioner. At the time of the appointment‚ Phahlane would have been the man in charge.

IPID and police sources said it needed to be asked how someone with a criminal conviction could be allowed to join the SAPS.

TimesLIVE has learnt from IPID sources that Tuesday’s arrest was in connection with the policeman allegedly stealing over R500,000 from the Intelligence Unit’s secret slush fund. The fund is meant to be used for operations.

He is also‚ according to sources‚ being investigated for last year’s daring heist at OR Tambo International Airport‚ where over R200-million was stolen.

IPID documents show that the alleged theft of over R500,000 from the SAPS Secret Services Account Funds relates to the purchasing of blinds for two Pretoria safehouses. According to one of the documents‚ the theft occurred just months before the policeman was arrested for the Sasolburg heist.

South Africans still reeling from the damning revelations coming out of the Steinhoff scandal are having to wrap their heads around another doozy.
Ideas
4 years ago

The document shows that he allegedly used senior a crime intelligence officer to sign off on two different purchases which were made in cash. The first purchase was to the value of R478,900 for blinds for a Waterkloof safehouse while the second – valued at R84,105 – was for blinds at a Brooklyn safehouse.

An IPID source said investigators discovered that neither of the companies the blinds were allegedly purchased from sold or installed such products.

“They were bought from another company instead. The actual cost of the blinds for the Waterkloof Heights safeouse was R63,057. The actual cost for the Brooklyn safehouse was R15,705. The total amount claimed from the Secret Services Accounts Fund was R563,005.

Another IPID source said the company which supplied the blinds gave them to a blinds installer‚ who the policeman paid R270,000.

“This payment was done without any procurement processes being followed. The installer has told IPID investigators that the policeman then allegedly inflated the total purchase and installation quote to over R500,000.

“He has told investigators that he gave the policeman a R50,000 ‘gratificatification’‚” the source said.

Top cop 'on a tender bender'

An IPID affidavit seen by TimesLIVE shows investigators are also looking into allegations that the policeman may have forged company documents to create fake quotations.

IPID spokesman Moses Dlamini said the policeman would appear in Pretoria Magistrates Court on Wednesday on charges of fraud and theft.

“The charges relate to the theft of over R500,000 from the a secret account meant to be used for police intelligence operations. The alleged theft is said to have occurred through the fabrication of quotations‚” said Dlamini.

He said more arrests were expected‚ including of senior officers.

Kwinika said that the inspector general of intelligence‚ who was responsible for investigating abuse of secret slush funds‚ needed to become more vigilant and act decisively to stop such thefts.

“There needs to be a lot more targeting of those involved in such abuses.”