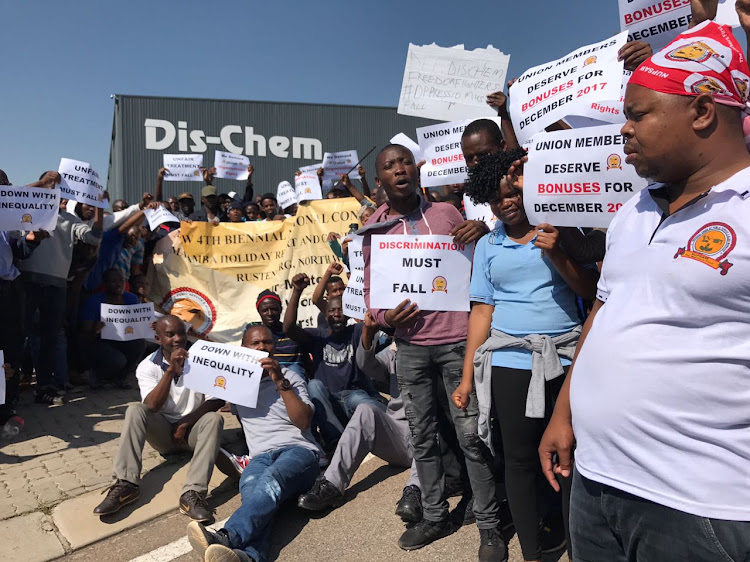 Workers affiliated to the National Union of Public Service and Allied Workers (Nupsaw) are picketing outside the Dis-Chem warehouse in Midrand‚ claiming employees are denied recognition and organisational rights.

Nupsaw national organiser Solly Malema said the matter was submitted to the CCMA and was not resolved.

Malema said Dis-Chem's failure to adhere to workers' demands will soon lead to a national strike targeting all Dis-Chem outlets.

"This is the first day of our legal strike concerning the nonpayment of annual bonuses to union members and the recognition of trade unions. We are going to embark on this strike until the company pays our members their December bonuses‚" Malema said.

"We have rules in this country and the constitution is clear that workers can join a union of their choice. Dis-Chem must abide by the rules or we will paralyse them completely."

Dis-Chem worker Morgan Radebe is among those who claimed they were not paid their bonuses. Radebe has been with the company since 2014. He is employed as a driver.

He said the nonpayment of bonuses has a negative impact on his life.

"The company is dividing workers. Workers that don't belong to any union were paid their bonuses. The rest of us are given excuses. How are we supposed to feed our families?" said Radebe.

Police are monitoring the peaceful protest. Private security guards are stationed at the main gate of the Dis-Chem warehouse. Dis-Chem could not be reached for comment.

You burn it down‚ tough luck - Lesufi to school protesters

Gauteng Education MEC Panyaza Lesufi on Wednesday bluntly told protesters: "You burn down or vandalise the school‚ we will not return to fix or ...
News
4 years ago

Durban University of Technology staff should not return to work until management concedes to their 10% wage increase demands.
News
4 years ago

Heated twar! It's People's Bae vs Pearl Thusi over her 'savage' comments

Pearl Thusi and EFF spokesperson Mbuyiseni Ndlozi aka The People's Bae got embroiled in a spicy war of words on Twitter after the actress slammed the ...
TshisaLIVE
4 years ago