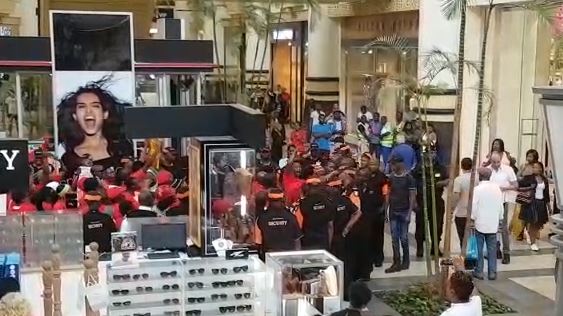 EFF protesters outside the H&M store at Gateway Mall in Umhlanga on Saturday.
Image: Screengrab

Economic Freedom Fighters protesters caused pandemonium outside the H&M store at the Gateway Mall in Umhlanga‚ north of Durban‚ on Saturday morning.

The group of about 25 EFF members‚ some of whom carried placards calling for the store to be shut down‚ were prevented from entering the store by armed private security as well as about a dozen mall security personnel.

Police were called in and attempted to negotiate with the members to leave the mall.

A shopper said she and her family were shopping earlier in the day and saw that the second floor entrance of the store had been closed.

“There was a notice on the door informing shoppers that it was closed for security reasons but shoppers could access the store on the ground floor.

“Then a little while later‚ we heard all the shouting and saw all the chaos. Police were trying to talk to the members. We left the mall a little later.”

EFF members tried to storm the Gateway store on Tuesday but were held at bay by police and mall security.

The Swedish clothing giant is still reeling from the recent global storm over a black child sporting a “Coolest Monkey in the Jungle” sweater‚ in an advertisement on its UK website.

EFF members trashed various H&M stores around the country in protest over the ad.

Retail clothing store H&M agreed on Friday to present the South African Human Rights Commission (HRC) with its plan on how to rectify the issues ...
Politics
4 years ago

Beleaguered fashion retailer H&M has been forced to close its doors and evacuate shoppers at the Gateway Theatre of Shopping in Durban amid a planned ...
News
4 years ago

Just as many South Africans were recovering from the drama caused by the Economic Freedom Fighters over the weekend‚ the red berets yet again stormed ...
News
4 years ago

The Economic Freedom Fighters must be held accountable for all the damages incurred as a result of vandalism at a number of H&M stores‚ the ...
Politics
4 years ago