Gardening 101: Oom April and his memories of the 'Groot Droogte' 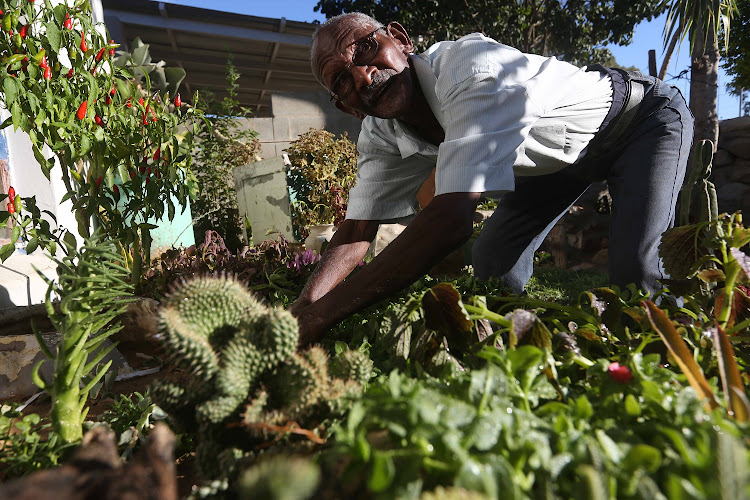 Oom April is not too perturbed by the Western Cape water shortage – for him it doesn’t compare with 1933.
Image: Esa Alexander

It is 40℃ in the shade but Oom April Jooste puts on his best collared shirt for the photo shoot.

Backache and blood pressure are troubling him but he is not bothered by the heat as he poses in the garden he has tended for over half a century.

Neither is he too perturbed by the Western Cape water shortage – for him it doesn’t compare with 1933. “That was the worst. When you travelled the land seemed to move [in the heat]‚” he says of the infamous crop-shrivelling drought that few alive can recall.

Since November‚ Jooste himself has been hot news in the dust-coated town of Clanwilliam on the edge of the Cederberg. He won a sustainable farming award from the Western Cape government and was photographed next to a beaming agriculture MEC Alan Winde.

Strangers have sought him out ever since‚ knocking at the door of the house in Eike Street where he lives with his third wife and some of his 19 children.

What is his secret? How does he keep his garden going in this time of great thirst?

Just go with the flow‚ says Jooste: “You plant according to nature. When it is rain time‚ you plant. But if there is not much water then you don’t plant.” 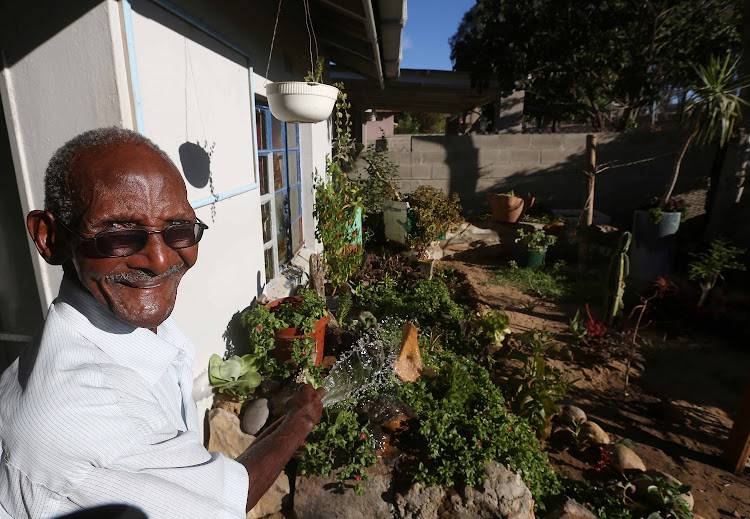 It’s a philosophy that has served him well at a small vegetable garden next to the Spar in the centre of town‚ which he has tended on and off for over 80 years‚ producing food for his family and for sale to a local hotel.

Until recently he worked there almost every day‚ a habit he inherited from his father who gardened there before him. A blood pressure scare has now confined him to his home garden‚ where he tends to a few healthy-looking succulents.

Undeterred‚ he now focuses his attention on kitchen chores‚ says his wife Liza. “He is upset every day he can’t get to his garden. But he doesn’t complain much. He hardly ever gets cross. Wakes up at 5.30am and goes to work in the kitchen.

“At the moment it is a bit hot for him to go to his garden [in town]. But when it gets cooler he’ll go back there‚” she said.

Jooste says he learnt his farming skills on the farm where he grew up near Calvinia. He has had several jobs‚ including gardening during a stint in Cape Town. For years he worked as a waiter at a Clanwilliam hotel. His favourite crops are peach and orange trees and beans.

“Gardening is in my blood‚” he told Winde’s office at the time of his award. “I wanted my own garden from a young age. Gardening is like raising a child. From a young age the plants must be nourished and cared for to ensure they become big and healthy.”

Winde said April was “an inspiration to all of us”‚ adding: “He is able to feed his own household and sells the surplus to a local hotel‚ earning an extra income”.

Jooste has no firm views on climate change. Will it rain any time soon? “We hope so‚” he says‚ eyes glittering with age.

When ‘dry white’ is not a vintage but a disaster

It's science to the rescue in drought-stricken Cape Town, where technology has replaced rain and prayers as the best hope of avoiding Day Zero in 89 ...
News
3 years ago