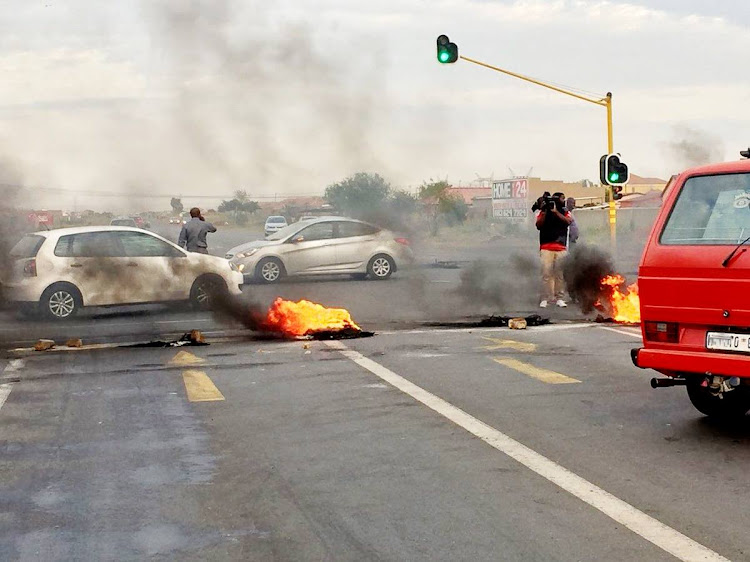 The R559 in Protea Geln, Soweto was shut down on Monday as residents whose homes were damaged during a storm in December wait for help.
Image: Facebook/News, Accidents, Robberies & Incidents

The N12 South and R559 in Johannesburg were shut down on Monday as Protea residents whose homes were damaged during a storm in December marched to Bedfordview.

Residents planned to hand over a memorandum criticising the quality of their homes. Community leader Phelelani Sindani said their houses were easily damaged by hail.

"We want to have a proper conversation with all stakeholders involved in the construction of our houses. We are paying close to half a million for these houses‚ it should be an investment but the product quality doesn't match the money we pay‚" Sindani said.

"It's very unfortunate that we are inconveniencing people that have no business with this issue but that's the nature of a march."

Several scholar transport vehicles were stuck in the blockade. Police were on the N12 trying to negotiate with protesters to allow vehicles to go through‚ but their request fell on deaf ears. A police helicopter hovered above.

Nonhlanhla Miya was in the traffic with her seven-year-old daughter‚ who should have been at school by 8am.

"I've been in this traffic for more than an hour. My daughter is late for school and I don't think I will make it to work on time today due to this protest‚" Miya said.

Miya's child attends school in Lenasia and she works in the Johannesburg CBD.

Johannesburg mayor Herman Mashaba had visited Protea after the storm to assess the situation. During his tour‚ Mashaba raised the issue of poor workmanship and initiated an investigation into the housing project. The investigation is ongoing and its findings are expected to be released next month.

City of Joburg to investigate why storm destroyed new houses

The City of Johannesburg will investigate why cosmopolitan houses in Protea Glen‚ Soweto‚ lost their roofs and collapsed during the hail and rain ...
News
4 years ago

The City of Johannesburg is now a disaster area.
News
4 years ago

The South African Weather Service (SAWS) has warned of severe thunderstorms‚ hail and flash flooding on Tuesday in Gauteng‚ Limpopo and North West.
News
4 years ago