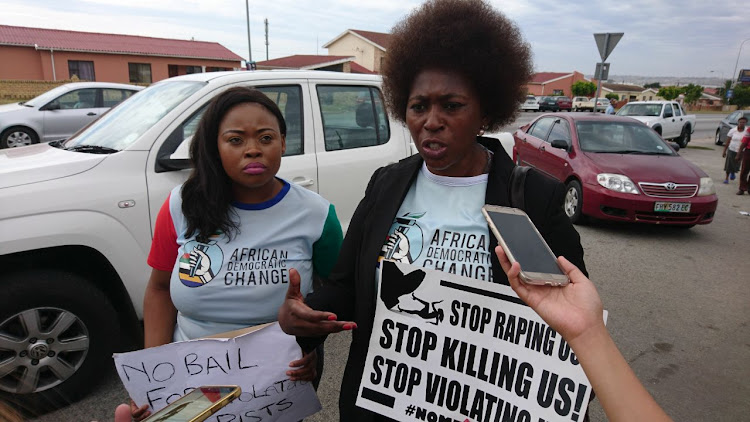 ADC leader Makhosi Khoza at the New Brighton Magistrate's Court, where she is supporting a woman who was allegedly raped by a Blue Bulls u21 player.
Image: Eugene Coetzee

African Democratic Change leader Makhosi Khoza has pledged her support to a young woman who was allegedly raped by a Blue Bulls u21 player.

Khoza‚ a rape victim herself‚ was speaking on Monday morning outside the New Brighton Magistrate’s Court in Port Elizabeth‚ where the accused was expected to appear for a formal bail application.

“I was raped when I was six years old and there was a lot of secrecy. As a result‚ I never shared it with anybody until 1992‚” she said.

“It is very important for us to encourage a culture of speaking out. Silence is what perpetuates this social ill.”

Khoza‚ who also brought along a copy of her memoir to give to the 18-year-old victim‚ said she would attend court as often as she could to support the young woman.

“We know that in the past‚ when Khwezi was raped‚ the political parties chose to be on the side of the perpetrator‚ rather than the victim. Recently the current president of the ANC came out and said he always believed that Khwezi was raped. Now we are saying‚ ‘Why was he quiet‚ why did he have wait for Khwezi to die?’” she said.

“If political authorities are quiet about this and are not taking action‚ nobody is going to‚ and that is why we are in court today – for the children‚ for the women and we want to make our voice heard in the corridors of parliament as well.”

The 19-year-old loose forward allegedly attacked an 18-year-old woman‚ whom he met in a tavern‚ after taking her for a drive to a secluded spot in KwaDwesi.

The rugby player – who cannot be named until he has entered a plea in court – is expected to appear later on Monday.