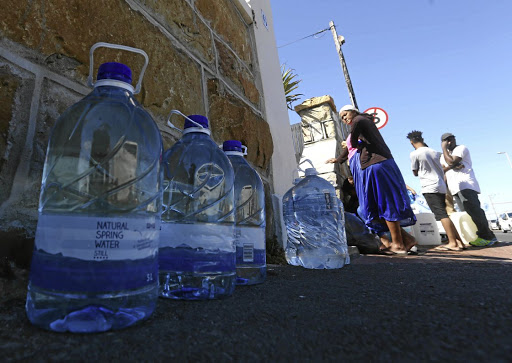 People queue to fill up water bottles at the spring in Cape Town.
Image: Esa Alexander

After 200 years of making beer‚ Newlands Brewery in Cape Town is going into the water business.

Queues at the brewery’s spring‚ where free water can be collected‚ have become almost unmanageable as the reality of Day Zero has dawned on Capetonians.

Now South African Breweries “has indicated its willingness to assist in the bottling and distribution of water drawn from the Newlands spring”‚ according to a statement on Sunday from Michael Mpofu‚ spokesman for Western Cape Premier Helen Zille.

He said Zille would attend a meeting at the brewery on Monday to discuss the rollout of the plan.

In a tweet on Sunday‚ Zille said she would also publish a summary on Monday “of what I know at present about how Day Zero‚ the run-up and the aftermath‚ will be managed”.

How will Day Zero work? Don't ask the City of Cape Town

Day Zero is coming in Cape Town‚ mayor Patricia de Lille admitted this week‚ but her city council has no detailed plans for how it will work.
News
4 years ago

Zille’s intervention comes after Cape Town mayor Patricia de Lille admitted on Thursday — the day before the City of Cape Town voted to relieve her of power to manage the water crisis — that Day Zero is now likely. The projected date is April 20‚ though it is likely to be sooner.

Mpofu said Zille’s first meeting of the week‚ early on Monday‚ would be with officials from national disaster management‚ the police‚ the South African Defence Force and the State Security Agency‚ among others.

“The focus of the meeting will be preparations for and management of Day Zero [and its aftermath]‚” said Mpofu.

The City of Cape Town told TimesLIVE on Friday that its plans for 200 water collection points around the city‚ where citizens will be able to collect their daily allowance. It was unable to provide any specific information.

Reacting to the article on social media‚ readers expressed alarm that preparations were not more advanced.

Tweeting a link to the article‚ columnist Tom Eaton said: “I can find references in news articles to #DayZero as far back as May. Want to know how far the city's plans have come in the subsequent eight months? Trust me‚ you don’t. Holy s**t‚ this is appalling.”

Education expert Nic Spaull‚ of Stellenbosch University‚ said the city council Day Zero plan was “totally unworkable”‚ adding: “If there are 1‚264‚000 households in Cape Town and only 200 water-collection points‚ that means 6‚320 people queueing per station every day‚ each somehow carrying 100 litres of water home?! WTF?!”

Nathi Radebe commented on the TimesLive Facebook page: “They must go to court and ask for a detailed plan. Courts help [the DA] all the time.”

Antoinette Dreyer said: “Day Zero will be the result of decades of sub-moronic stupidity... no single political party is responsible.”

Eberhardt van Gould said: “Since both central and local governments have given citizens a fat middle finger‚ citizens should wake up and give them back a fat middle finger through a tax revolt. Rather invest that money in managing their own community and go back to self-sufficiency.”

Troy Gilson said: “The poor people who work at the landfill sites will have to deal with everyone’s faeces. Imagine the disease outbreaks.. They will need hazmat suits.”

Karabo Phetoane said: “DA votes against DA water levy. DA strips mayor of water powers. Deputy mayor now in charge of water until it runs out. Premier is writing another article on it. Mmusi is lecturing Cyril. And all is under control.”