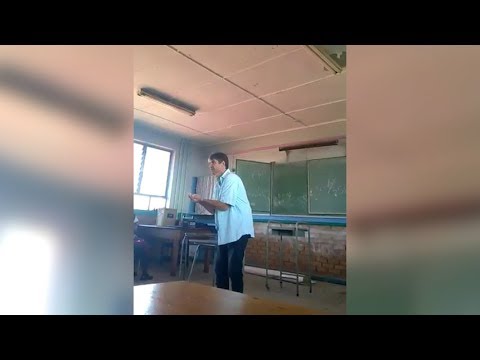 A video shared on social media of a white teacher telling black pupils that they could remain “idiots” has stirred up a bitter controversy over racism in the classroom.

Twitter user @Mpoww_D posted the video online on Sunday and accused the teacher in Randburg‚ Johannesburg‚ of being racist and discriminatory.

“24 years into Democracy and this is the kind of racist behaviour that my sister and her peers have to endure from their educator every morning at Hoerskool Die Burger‚” she tweeted.

The woman said that her younger sister came home distressed after their Grade 9 social science teacher spoke to them in a discriminatory manner.

“My sister came home on the first day of school and complained about the teacher. She was even crying and asked to be taken to a different school. I told her to take a video if he ever did it again. He said offensive things the following day. According to her‚ the commotion in the class only started after the teacher said all those things‚” she said.

He went on to say he would show them videos of “idiotic black people that talk. Because that’s the video we’re watching now”.

“Sorry that I say the words idiotic and black. Because I don’t believe idiot‚ neither do I believe in blacks. Because I am playing your game‚” said the teacher.

The learners laughed off his comments‚ to which he asked: “What’s funny? What’s funny with the idiotic blacks? Remember one thing people‚ there is no such thing as an idiot. Only one that wants to be.”

However‚ @Mpoww_D tweeted an update from @Thobeka_Rare‚ a media specialist for the Gauteng education department‚ on Monday which said: “The school expressed shock and has apologised. Also promised to issue a final written warning and report the educator to Labour @Lesufi. Thank you so much to everyone who assisted.”

So we only invented Peanut Butter? & people say we must dialogue. What you hear is just but a fraction of what gets said around dinner tables at braais and picnics .whilst you teach your kids to love and assimilate they teach theirs that we are non achieving peanut butter makers

The video sparked a debate‚ with some users claiming that the teacher was merely doing his job under the circumstances.

as always the video only shows one part, not what led to all this.

As angry and worked out as I'd like to be I can't. can't don't find anything about this video that's worth it. This guy is using a method of teaching some might call "shock therapy". Let's not put ghosts where there are none.